No one knew what to do with them.

Horses, once considered some of the finest and most valuable animals alive, are no longer deemed useful to humans after they grow too old to win races or settle bets between gamblers in an often brutally competitive industry. Once prized and cared for, these beautiful animals are often sent to slaughter. Meanwhile, men who strayed down the wrong path add to the teeming numbers in U.S. prisons who are shut away until they've served their time.

But some people saw the failures of society in both plights of the unwanted and forgotten, humans and animals alike, and decided to give them a second chance instead of casting them aside.

Second Chances Farm, created by the Thoroughbred Retirement Foundation, which rescues racehorses from abuse and slaughter once they've left the spotlight, is one of the programs that links inmates to retired racehorses, helping them learn how to care for the animals. The skills they learn could lead to future jobs, once they're free men again.

"I got laid off, and my wife and I split up," Albert Healey said, remembering how he delved into crime and drugs, until the arrest that led to his opportunity to care for horses.

"They listen to me," Russell Pierson said of the horses, in a National Geographic short on the program, "when other people don't."

Through their interactions with the horses, as well as the dogs and cats who call the farm home, prisoners rediscover their own kindness - something almost impossible to access behind bars.

"It's a kind of self-awareness that only a horse can give a man," said Judi Coyne, who coordinates Second Chances Farm.

The hope that horses give men doing time is catching on: Already, 13 states across the U.S. have programs that give inmates the opportunity to redeem themselves through caring for horses.

And research has indicated that the lessons the prisoners can learn from the horses may actually prevent them from committing crimes in the future.

Once cast aside, these humans and animals find new hope in each other.

Watch a short documentary on the power of the program here: 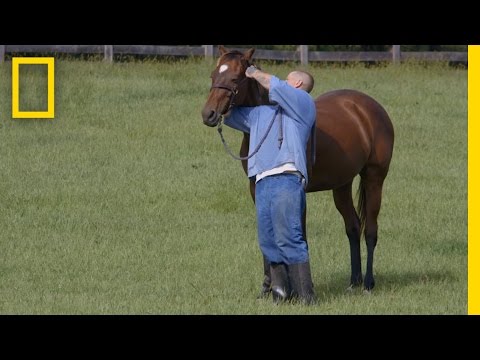