Q: Why Do Cats Try To "Herd" People While They're Walking?

A: Because they're trying to manipulate humans into giving them something they want. 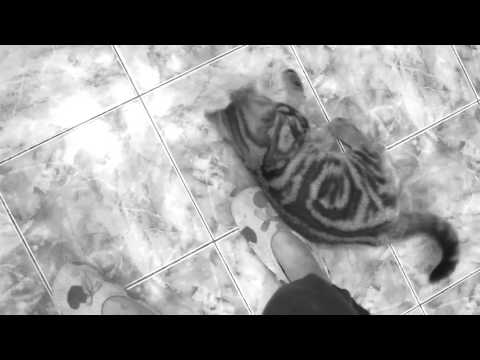 Sometimes cats make it physically impossible just to walk. They'll dart between a person's legs or roll over somebody's moving feet, all in an effort to... to accomplish what, exactly? According to Dilara Goskel Parry, a cat behavior expert at Feline Minds, cats do actually have an end goal in mind when they try to "herd" people this way. They're not just being playful -- they're also being manipulative.

"While cats are certainly not bred to be herding animals like some dogs, they do learn to direct human behavior -- and motion -- when their behavior is reinforced," Parry said. "For example, ‘I do this, and my person is going to feed me.' The darting and rubbing, which is called marking, likely starts as excitement, such as they feel right before feeding time. Many cat guardians reinforce these behaviors that they may find annoying simply by moving faster and feeding the cat."

It doesn't have to be feeding time for cats to engage in this type of behavior, Parry explained, but they're more likely to perform it whenever they're particularly excited about something -- which happens most often to be food. "It could be a different anticipated reward, such as going outside, or even playtime with toys or a sustained petting session, if that is a routine," she said. "They may mark against other animals when they are in this state of arousal as well."

Parry cautioned that although it might seem sensible to put a stop to such behavior as quickly as possible, it's really just a short-term solution -- and it has definitely long-term ramifications. "While people think they are taking care of the problem by answering the cat's request faster, they are inadvertently making it worse," Parry explained. "Or," she added, "they're making it cuter -- depending on your perspective."