Q: Do Cats And Dogs Naturally Hate Each Other?

(Above photo by Katlene Niven)

A: Yes, their behavior creates a natural conflict. But that behavior can be changed.

Before the shootouts between Hatfields and McCoys, before Capulets started stabbing Montagues, before Seinfeld ever uttered the word 'Newman', the blood-feud between cats and dogs had been brewing for millennia. Yes, everybody knows the troubled tale of humankind's two closest allies, the ancient battle for table scraps and the human lap. The dispute is so old, it has been un-scientifically explained in the folklore of many different cultures, from Romania and China to West Africa, and immortalized in pop culture-perhaps nowhere so succinctly as in "Homeward Bound: The Incredible Journey" when Sassy opines: "Cats rule, and dogs drool."

And yet, what do we really know of the row between these species? Is it true that cats and dogs are just hardwired to hate each other?

Well, sort of. Dogs and cats are both mammals of the Order Carnivora, which means they eat meat and will hunt to get it . In the wild, sometimes that means canines eat felids and vice versa - lions tango with African painted dogs, wolves munch on wildcats, tigers pick off neighborhood strays, coyotes abduct alley cats, and on and on. But out there, cats and dogs don't "hate" or "love" each other more or less than any other species. In fact, both would probably rather avoid the other and pick on easier prey.

However, cats and dogs are forced to interact when we bring them home and plop them into our living rooms. And that's where the miscommunication begins.

Dogs and cats approach the world in very different ways, says Pam Johnson-Bennett, best-selling author of cat behavior guides and host of Animal Planet's "Psycho Kitty." "There's a reason there are no cat parks in the world," she points out. Cats like to hang back and assess the situation. She says it's not that cats are antisocial or mean, just that they take a lot longer to warm up.

On the other hand, dogs will typically charge right up to a new person or animal to investigate. Johnson-Bennett says the cat interprets this behavior as a possible threat and instinctively tries to climb or run away. Unfortunately for the cat, running triggers a chase response from the dog, and the whole situation rapidly deteriorates into a cartoon scuffle cloud.

"The cat tries to get away, the dog thinks the cat is inviting it to a game, and so chase ensues with neither party understanding what the motivation of the other one is," says John Bradshaw, an anthrozoologist and author of myriad books about cats and dogs.

Looking at the miscue from an evolutionary standpoint, Bradshaw would remind us that dogs are descended from the highly social wolf. On the other paw, domesticated cats descend from the mostly solitary Arabian wildcat. In other words, you can't really blame either species for the kerfuffle. Each animal is just practicing behaviors that have been proven to help it survive through the eons.

"Compared to their wild ancestors, cats are actually remarkably good at getting on with other cats and people," says Bradshaw, "but it's clearly a process that's not gone as far perhaps as we'd like it to go." (Indeed.)

So, should we all just give up on harmony and teach our mutts that cats just aren't that into them? Nah.

Johnson-Bennett consults for multi-pet homes all the time. She says there are a number of things you can do to make a cat-dog introduction go smoothly, and most of them have to do with reining in the pooch. "It doesn't seem fair," she says, "but the dog has to learn the cat's language." (I guess Sassy was right.) A typical exercise could mean bringing both animals into the same room, with the dog at your side on a leash. If the dog acts calm, give him a treat. If he lunges at the kitty, lead him a few feet away until he relaxes. Then slowly inch back towards the cat. All of this teaches the dog that full frontal assaults will not be tolerated. At the same time, the cat learns that it can be in the same room as a dog without being torn to smithereens. (You'll also want to reward the cat's good behavior with affection and treats.) Eventually, both animals will learn that good things happen-snacks, toys, backrubs-when they're in the same place at the same time.

"Mammals are clever," says Bradshaw, "and because dogs and cats are domesticated, they're particularly flexible in their behavior in a way that other mammals are not." He added that introductions are most successful when both animals are just a few months old and still learning what to make of the world.

All in all, it seems the age-old spat between these two species is mostly fiction. And obviously there are plenty of examples of dogs and cats getting along just swimmingly. 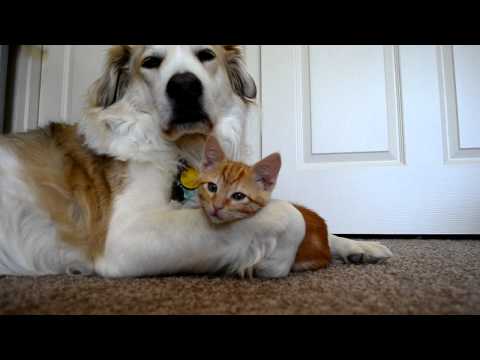