Like many of the world's greatest love stories, this one was written by quill - two porcupines worth of them, to be exact.

A few weeks back, keepers at the Ramat Gan Safari Park in Israel noticed something out of the ordinary. For several days in a row, porcupine droppings had appeared outside the enclosure of the facility's resident porcupine, a female named Dorit who had been taken in eight years earlier as a helpless orphan.

Officials originally suspected that cleanup staff had been cutting corners by sweeping Dorit's waste beyond the fence. But, as the zoo writes on Facebook, workers denied responsibility for the errant poop.

Day after day, as the droppings continued to appear, the mystery deepened. Then another befuddling clue turned up near Dorit's enclosure - a quill.

After a night guard spotted the pointy porcupine part while making the rounds, an alert was sounded that Dorit may have in fact escaped. But when an inspection the next morning found her still in her enclosure, zookeepers began to suspect that perhaps a forbidden suitor may have dropped the quill while out on a late-night tryst.

As Israeli newspaper Haaretz reports, the zoo set up a hidden camera to see what was really going on - and, sure enough, they caught Dorit's secret visitor in action. 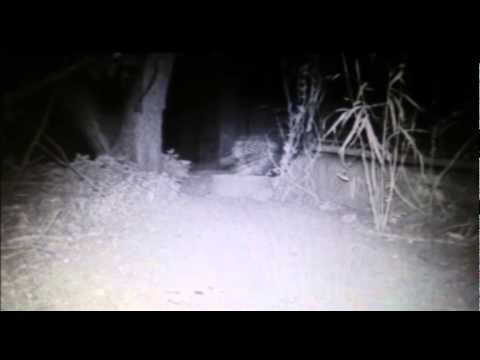 Indian-crested porcupines are found throughout Israel and the eastern Mediterranean, so his presence in the region is not a mystery, though officials aren't sure how he breached the zoo's perimeter. It's unclear if he sneaks in for the evening escapades, or if he is hiding somewhere in the zoo and waiting to see Dorit after nightfall.

A zoo spokesperson told Haaretz, "If he's hiding inside the [zoo], he's doing it very efficiently."

The Jerusalem Post says the zoo is debating what to do next. Since Dorit is unfit for life in the wild, releasing her is not an option, yet forcing the wild visitor into captivity is not an ideal solution either.

As unique as this love story may seem, it actually isn't the first time a wild animal and a captive one have struck up a relationship. Just last month, a free-roving male elephant in India broke into a zoo to unite with a captive female - proving once more that the bonds of affection can supersede the boundaries humans put between them.