Man Refuses To Abandon Chimp, Even Though Everyone Else Has

For more than 30 years, Ponso the chimp has been living on a deserted island off the Ivory Coast. He has no source of food or water, and his companions all died years ago.

But thanks to one man, he's alive.

For several years, a villager named Germain, despite his limited income, has stopped by to drop off food for the lonely chimp. While the diet of bread and bananas isn't enough for the roughly 40-year-old chimp to thrive, it's kept him alive - and it's clear he shows his gratitude.

Yet Ponso's sad plight is nothing compared to his sad past. For years, he was used in painful tests by the New York Blood Center (NYBC), which conducted hepatitis research using scores of chimps, many of whom were captured from the wild.

While trapped in the labs, the chimps faced dozens of biopsies and anesthetizations apiece. One lost her eye when researchers shot her in the face with a dart; another had only one arm after he was hit with a bullet meant for his mother - poachers killed her so he could be kidnapped for the lab.

Mothers lost baby after baby; other chimps strangled themselves at the research center, where for many years they lived chained by their necks to jungle gyms.

Yet when the tests were over, NYBC decided to abandon the chimps, dumping them on a string of islands near Liberia like the one Ponso lives on. They had no source of food or fresh water, and many died soon after from disease and starvation.

Ponso himself was one of 20 chimps abandoned in 1983, but, in the words of one aid group, the island soon became a "veritable massacre." Within months, half of the mistreated animals were dead or missing.

The nine survivors were relocated. A short time after, five more of them were dead.

Ponso was the sole survivor, along with his mate and their two children. But the rest of his little family died within days of each other in 2013. Germain, the villager who had been feeding them, reported that Ponso helped bury his family by throwing dirt on them.

Since then, the elderly chimp - who's at least 40 years old - has been living out his days alone and abandoned on the quiet little island.

"Imagine yourself alone on an island that offers no resources, listening for the least sign or noise that indicates a visitor," SOS PONSO, a group dedicated to saving the lonely chimp, wrote on Facebook. "This is what the sad life of Ponso is reduced to!"

"He waits for death, alone, crying and responding intermittently to the cries of wild chimps," the group added. "What a reward for having been used for years by a huge laboratory."

And just when it seemed things couldn't get any worse for the abandoned chimps, it did. While NYBC had apparently given up on Ponso long ago, the group was keeping the larger colonies of chimps alive by dropping off food and providing them with vaccinations.

But last year, NYBC announced that they were cutting off all support to the chimps, including one island that's home to 60 to 70 animals, willingly leaving them to starve to death. The center argued that since it was under no legal obligation to care for them, it was fine to let them die.

The move was roundly condemned by the scientific community. Jane Goodall called the NYBC's decision "completely shocking and unacceptable." Duke University primatologist Brian Hare told the New York Times, "Never, ever have I seen anything even remotely as disgusting as this."

But the outrage fell on deaf ears. Animal welfare groups rushed to one of the islands, where they found the chimps had been left without any fresh water.

Since then, a kind public has been picking up the task dropped by the NYBC; the Humane Society of the United States, fueled by public donations, has spearheaded efforts to feed and care for the Liberian island with the large chimp colony.

As for Ponso, the loneliest of the chimps, a group calling itself SOS PONSO formed to make sure the mistreated animal gets the care he needs. Thanks to public donations, Ponso now gets deliveries of fresh food and a team of international supporters to look out for him.

"It's abhorrent that an organization with hundreds of millions of dollars in revenue and assets has left Ponso and the Liberia chimps to die," New York Blood Center: Do the Right Thing, one of the several Facebook pages dedicated to saving the NYBC chimps, wrote, noting that the nonprofit NYBC brought in an estimated $400 million thanks to research the chimps were used for. "We will not abandon Ponso and will continue to campaign for NYBC to do the right thing." 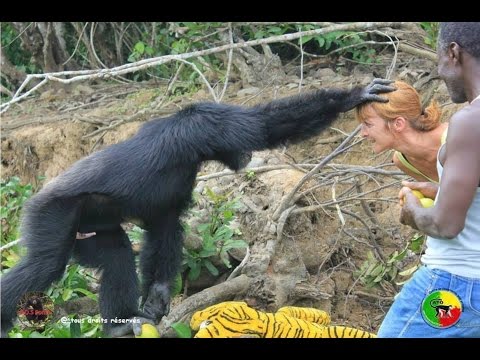 "Ponso deserves a beautiful and real sanctuary, and not this life of isolation," SOS PONSO said.

Significant funds are needed to make sure Ponso gets the food and vet care he needs. If you'd like to help, you can make a donation here.

If you'd also like to support the other chimps abandoned by NYBC, you can donate here.

You can also contact NYBC and ask them to take responsibility for the animals they left to die.