It should never have happened.

A loyal police dog, a 5-year-old bloodhound named Zane, is dead after being left for ten hours in an officer's patrol car.

Officer Jerahmy Williams found Zane dead on Thursday and reported the death to the Conyers Police Department in Georgia.

After going home sick, police say Williams neglected to take Zane, who lived with Williams, out of the back of the take-home patrol car.

Temperatures on Thursday approached the 90s.

The officer is on paid leave while the Rockdale County Sheriff's Department is conducting an investigation into Zane's death with the district attorney's office.

"We are committed to the care and proper treatment of our working K9s. We are mourning the loss of our own," Police Chief Gene Wilson announced on the Conyers Police Department's Facebook page.

Though this case is extreme, the death is a grim reminder of the dangers of leaving dogs in cars, even for just a few minutes. Cars can heat up so quickly, even to temperatures as high as 150 degrees, threatening the lives of any poor animals left inside.

Because dogs don't have the convenient (smelly) sweating mechanism that humans do to stay cool, overheating can happen suddenly for them - and it can be deadly.

Watch a video of even one of the toughest beings on earth, an NFL football player, try to brave it out in a hot car here: 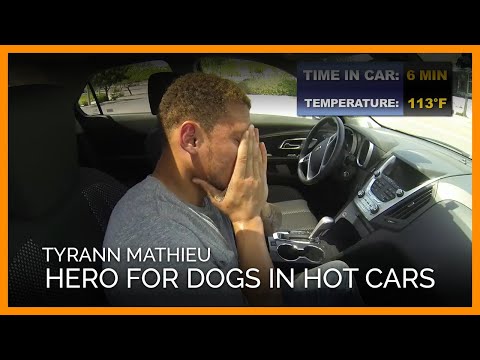 Never leave your dog in the car. Even with the windows cracked, the heat can skyrocket and quickly become deadly.

Learn how to tell if your dog is overheating here.

And, here are ways you can help if you see a dog trapped in a car.

CORRECTION: A previous version of this article said Conyers, Georgia was in Rockland County. It is actually in Rockdale County.