Petrified Whale Throws Himself Against Rocks To Escape Hunters

These are the heartbreaking final moments of a pilot whale during the infamous annual slaughter in Taiji, Japan - and an important reminder of what the experience is like for animals caught in the cruel drive hunt.

The pilot whale was one of a pod of around 70 that was captured and driven into the netted killing cove late last week. The first day, the pod clustered together in the middle of the inlet, clinging together for comfort and protection.

Over the next few days, the family was slowly destroyed. The matriarch of the pod was tied up and watched as dozens of her family members were slaughtered in front of her, butchered until the water turned a bright red. A few were taken to be sold into captivity - others died from the trauma of the capture. At one point, a whale was spotted swimming through the blood-red water where his family had died and "crying out loudly," Sea Shepherd reported.

On the fourth day, one of the whales escaped from under the tarps that shield the killing from the eyes of observers. And Sea Shepherd was on hand to record his attempted flight.

"One pilot whale - who appeared to have already been "pithed" by the hunters (stabbed by inserting a metal rod through the spinal cord, just behind the blowhole), visibly bleeding and barely able to stay above the water's surface - somehow managed to briefly break away from under the tarps and tried to find a way out by the rocks alongside the cove, but was dragged through the water and back to the boats by a heartless hunter in a wetsuit," the group wrote.

The video is heartbreaking. The petrified whale throws himself against the rocky coast, desperately trying to escape as he bleeds out into the water. After days without food and watching countless family members die, all he wants is to escape - in any way possible.

He sinks under the water, but a group of hunters boats up and ties him up by the tail. They drag him back toward the butchering section, while he uses his last burst of energy to violently fight against the tether, even as his blood clouds the water with a dark red stain.

"He just doesn't know what's going on with him," a woman can be heard saying.

While the video is difficult to watch, the pilot whale's last moments are a testament to the brutal horror dolphins and pilot whales face during Taiji's heartless annual hunt. 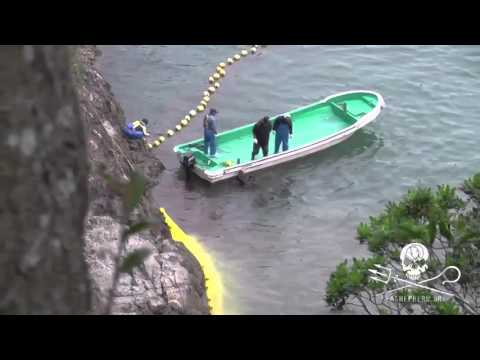 Each year, 20,000 dolphins are slaughtered in Japan, and the Taiji hunt alone is responsible for killing hundreds of animals. The few who survive the blood-red waters are sold into captivity, fated to spend the rest of their lives cut off from family and performing at zoos and marine parks. Most of them, like this one, are butchered and sold for their meat.

The juveniles, too young to butcher or sell into captivity, are often thrown back into the ocean. Their deaths aren't counted in the official death toll, but it's unlikely that they can survive after their entire family has been killed.

While proponents of the hunt market the massacre as a Japanese tradition, drives hunts have only become commonplace in the last few decades. The Taiji hunt in particular is driven by a handful of local men who are getting rich off the killing.

And as Sea Shepherd wrote, the video dispels the myth that the hunt brings a quick, humane end to the captured animals - and instead "reveals the horrific actions of the hunters."

This isn't the first harsh footage to come out of Taiji this year - in September, a desperate dolphin flung himself on the rocks at the feet of Ric O'Barry, founder of the Dolphin Project and star of the 2009 film "The Cove." "This is anguish," O'Barry said at the time.

Unfortunately, witnesses to Taiji - like those who've captured this pod's brutal end - are prohibited from interfering with the hunt. If they do, they will be arrested and deported, and no one will be left to witness it.

And witnesses are needed. "As Taiji continues to ruthlessly wipe out entire pods – multiple generations at a time – of wild migratory pilot whales from the sea, they may very well be driving pilot whales to extinction," Paul Watson, the founder of Sea Shepherd, said in a statement.