This Is Where Petco And PetSmart Get Their Animals

You know all those cute guinea pigs and hamsters at your local pet store? This is where they come from.

While many people are familiar with the horrors of puppy mills, few know that other animals purchased large-scale by pet stores, such as rabbits and guinea pigs, endure the same awful conditions.

A three-month undercover investigation conducted by PETA provides an inside look into Holmes Farm, a large Pennsylvania breeder that supplies animals to Petco, PetSmart, Pet Supplies Plus and other large pet store chains. And it's not pretty.

Investigators found that thousands of animals were being stored in plastic storage bins, stacked in shelving units and rarely checked on. The facility reeked of feces, PETA said. One floor was splattered in blood after cats were allowed to jump in and out of the crates and attack animals.

"One hamster who had been attacked by a cat was just left to flail and die on the floor," the group said.

The rabbits were packed into tiny wire cages filled with piles of feces. Many of them had urine-stained feet or signs of severe illness. They were denied veterinary care.

"This lethargic rabbit was reported to a manager, who said that he would 'check on' the animal," PETA wrote of the animal below. "Later that day, the rabbit was found dead."

Dead rabbits were regularly found in cages with the live ones - up to four were found dead in one day. The rabbits were also kept on wire floors, which can cut through rabbits' feet.

Investigators also witnessed literal piles of newborn mice thrown on top of each other in a box, calling out for their mothers "in a bin that smelled of death and excrement and was labeled 'Freeze,'" PETA said.

Hundreds of them were sealed in plastic bags and thrown in a freezer to die so they could be sold as snake food to owners who want a more humane alternative to live feeding. A clip shows the mice struggling to escape the packed bag; they were still alive 15 minutes later.

Investigators witnessed workers grabbing chinchillas by their tails and throwing hamsters between boxes that were several feet apart. Hamsters and gerbils exhibited severe signs of stress.

Many of the animals had no water or or only filthy water available, leading to dozens of deaths. When the investigator found hundreds of mice without water and provided some, the animals "drank in a frenzy," PETA said.

In another incident, 50 small animals were piled into a cooler filled with feces and gassed.

Petco and PetSmart also returned sick and injured animals to the so-called farm, several of whom died shortly after. "Some rats evidently carried rat-bite fever-a potentially fatal disease transmissible to humans that has led to two lawsuits against Petco," PETA said.

Holmes Farm supplies animals to hundreds of pet stores along the East Coast, according to PETA, including chains like Petco, PetSmart and Pet Supplies Plus.

Petco said on Tuesday it had already cut ties with Holmes Farm based on the results of its own investigation, a "regular part of our strict vendor oversight protocol." Yet PETA said that the Petco inspection was conducted on December 2, and the investigator witnessed orders with hundreds of animals being packed for Petco as late as early January.

Holmes Farm has passed several recent inspections by the USDA, an indictment perhaps of the federal department's lax oversight. Following PETA's report, the USDA conducted another inspection of the facility and has launched an investigation of Holmes Farms.

Sadly, scenes like this are the rule, not the exception for animals sold in pet stores. Whether it's a dog or a hamster, animals bred for retail are often kept in filthy conditions, exposed to abuse and illness, and deprived of water, veterinary care and other necessities.

If you're considering adding an animal to your family, consider adoption. Even small pets like guinea pigs and hamster can be found at shelters and rescue groups. To get started, visit Petfinder.com.

You can watch video footage from the investigation below. Needless to say, it includes some disturbing content. 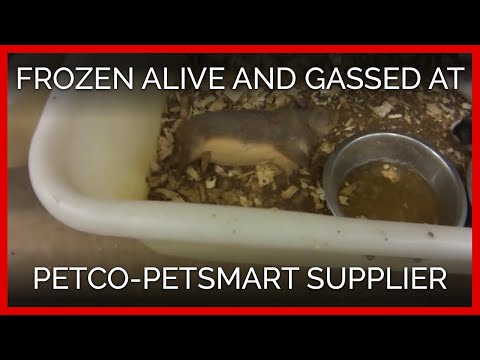