Penguins Steal From Each Other To Keep Their Babies Safe

No one rocks a tuxedo quite like a penguin - especially an Adélie penguin, the species we most associate with that image of the dapper bird.

Not only are they the best-dressed bird this side of the Antarctic, but Adélie penguins are also crafty - and by crafty, we mean downright criminal.

The Adélie penguin is one of four penguin species in Antarctica. But as cute as they are, they're not known for their gentility.

"Gentoo penguins are more mellow and curious about people," Dyan deNapoli, penguin expert, TED speaker and author of "The Great Penguin Rescue," told The Dodo. "They will walk up to you. But Adélie penguins don't behave that way. They are a little more aloof."

And although friendly with one another, they can be a bit sneaky and aggressive when it comes to their nest.

In fact, they're thieves.

Adélie penguins are one of the few penguin species to use rocks when building their nest.

Then they resort to some underhanded behavior.

"It's a lot less energy and effort to steal a rock than to go find one," deNapoli said. "They'll steal a rock from a neighbor's nest so they don't have to go hunting further away like down to the shoreline."

And with these two penguins (see video below), they will just keep repeating the pattern. Find the rock. Place the rock. Steal the rock. Over and over.

"That penguin is somewhat clever not having to work as hard," deNapoli said, referring to the video below. "He's pretty clever because he's taking a shortcut. He's just going to pinch rocks from the neighbor's nest." 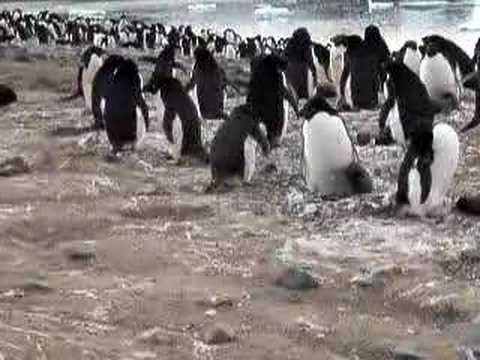