Zoos often try to craft their enclosures to resemble animals' natural habitats, but even the coziest confines of captivity can't compete with the feeling of being free.

Five plucky little penguins at the Odense Zoo in Denmark were recently caught in the act of trying to make a break for it. Unfortunately, their bid for freedom was thwarted when the birds' keeper was alerted to their escape attempt after spotting their hurried little footprints in the frosty enclosure floor - leading to their discovery in a corridor in the back. 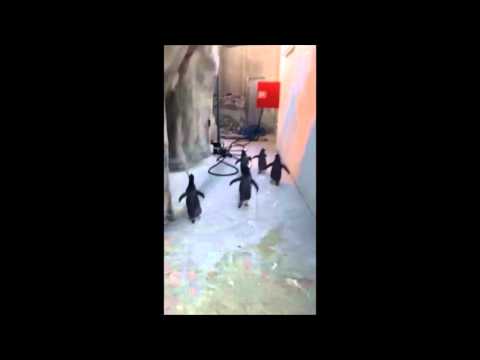 It's unclear just how close these captives came to getting out, or if they had tried escaping before, but it wouldn't have been the first time a penguin succeeded in escaping confinement.

In 2012, a penguin managed to slip out of his enclosure at an aquarium in Japan, after which he took up residence in Tokyo Bay. Despite having been born in captivity, the feathered escapee was able to thrive on his own in the world beyond his cage. By the time he was found and captured months later, the penguins keepers couldn't help but remark on how happy and healthy he had been outside the aquarium.