In the summer of 2000, a 17-year-old ship on its way from China to Brazil was squeezing between two islands off the coast of South Africa. Out of nowhere, a hole formed in the massive hull of the MV Treasure, which was carrying 140,000 tons of iron ore on board. It wasn't long before the ship drifted eastward and then, rocking in the tempestuous surf, sank to the bottom, its 1,300 tons of fuel oil ballooning above it as it fell.

While all the members of the vessel's crew were airlifted to safety, the oil spill threatened to take thousands of other casualties: the penguins of the two islands it had been passing. Robben and Dassen Islands are home to the largest and third largest populations of African penguins in the world, and provide vital breeding grounds for the endangered species.

Soon enough, a wall of oil came crashing over the penguins. Birds began to wash up on beaches, soaked with oil, many of them dead or dying. 20,000 African penguins were oiled, and another 20,000 clean penguins were at risk as the oil moved toward their habitat.

Dyan deNapoli, a penguin expert and scientist known as the "Penguin Lady" spoke about the rescue to an audience at a presentation at Hunter College in New York this week. "It was the largest animal rescue that had ever been attempted," she said. "We didn't even know if it would be possible to save this many birds."

An army of 12,500 volunteers flooded the small town where the penguins were being kept. In a matter of days, they'd filled a local rescue center, the Southern African Foundation for the Conservation of Coastal Birds (SANCCOB) with penguins, and quickly ran out of space. They turned to an abandoned train repair warehouse, which became the de-facto penguin rescue center.(Tony van Dalsen)

At first, things looked grim, deNapoli told The Dodo. "Penguins are extremely vocal birds, and when we first entered the enormous warehouse in Cape Town where most of the 19,000 oiled penguins were being housed, I expected to be met with a cacophony of braying and honking and squawking," she said. "But, instead, it was eerily silent. There were hundreds of round holding pens in the building, each one with up to 125 oil-soaked penguins in it. The penguins were standing statue still and shoulder-to-shoulder in the holding pens. They weren't fighting or harassing each other the way they normally would in such tight confines, so it was immediately clear that these birds were traumatized and in a state of shock."

Volunteers had to force-feed the wild birds initially, but soon, the birds learned to eat dead fish from their hands (deNapoli noted that this is a testament to their ability to quickly learn).(Tony van Dalsen)

The resources required to handle the oiled birds were staggering - they needed 400 tons of fish (donated from local fisheries), 302 6-gallon containers of detergent and 7,000 tons of sand for the birds to stand on. Local hotels offered discounted rates to volunteers, and the Red Cross provided food and medical assistance.

Not only did they clean birds, they evacuated at-risk birds and collected the chicks that had been abandoned by oiled birds.

All in all, the rescuers saved 95 percent of the penguins threatened by the spill - a number that's unheard of in the world of wildlife rescues after oil spills. They released the birds with temporary identification (hot pink chest marks) and permanent arm bands so that they could track their health - and so far, the penguins who survived the spill have lived nearly as long as those who were unaffected by it.

DeNapoli gave a TEDx talk about the rescue, which still holds the record for the largest and most successful animal rescue in history. 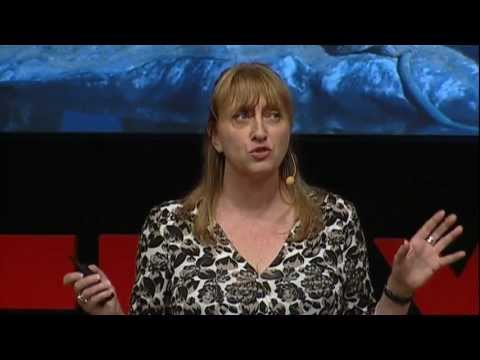 Though these penguins were saved from the oil surge in 2000, they're not in the clear. Penguins face threats from overfishing, entrapment in fishing nets, climate change and, of course, oil spills. Even more importantly, penguins are considered an "indicator species" - a measure of the overall ecosystem health.

"We have lost up to 90 percent of most penguin populations over the last 50 years," deNapoli said. "Essentially, penguins are the canaries in the coal mine for ocean health."

See SANCCOB for more information on how to help threatened and endangered penguin populations or read deNapoli's book all about the Treasure oil spill penguin rescue.