Some cemeteries are home to both the living and the dead.

Like the Sarhento Mariano cemetery in Manila, Philippines, where poor families often move into the stone mausoleums.

But they're not alone - there are dogs who also call the cemetery home.

Of all the residents of the Sarhento Mariano cemetery, the 150 or so dogs who live here may be the most downtrodden - desperately hungry, many suffering from a condition called sarcoptic mange, which leaves them without fur.

When Ashley Fruno, founder of local rescue group Pasay Pups, came across this place a couple of years ago, they already seemed to have at least one paw in the grave.

On weekends, before the sun rises and the heat becomes unbearable, Fruno, along with a team of volunteers, takes the dogs for walks.

If a breeze ever blows through Sarhento Mariano cemetery, it's likely from the collective whirring of tails that greets her arrival.

The dogs come running from beneath stone monuments, leaping excitedly at her heels.

They get a meal, medical checkups and much-needed tenderness.

There is also a spay-and-neuter program in place, and with all this care, many of them have grown their fur back.

But Fruno's mission doesn't end with the dogs. Many of them are considered pets, claimed by the families who live alongside them.

"In the Philippines, the concept of ownership applying to dogs is very loose," explains Fruno, a Canadian working in Manila. "It can be your dog even if you feed them once a week. The dog just sort of generally lives around your area. Most of them are free-roaming and wander around to find food."

Fruno thinks the best way to help them is by empowering the entire community - starting with its youngest members.

"I think the most important aspect of working with the community involves the children," she says. "Because they're just so apt to learn. As kids learn something, I think it's easier for them to influence their parents. I think much easier than it is for, let's say us, to do it."

And so, as Pasay Pups wends its way through the cemetery and surrounding neighborhood, volunteers work to educate the community on how to care for the dogs.

"I have found through this work that when the people have it bad, the animals have it even worse," she says. "The daily struggles that these families face are unimaginable to most of us."

But gradually, Fruno has been making a difference. Volunteers often come from among the locals, who join the teams that feed and walk the dogs.

Children, especially, are growing up to see dogs not so much part of the scenery, but companions and even best friends.

"You'll see people giving their dogs access to water when they didn't before," Fruno says. "Or people bathing their dogs with flea and tick shampoo that we provide. Or kids walking their dogs on their own. Or petting dogs - things you wouldn't necessarily see before."

And, along the way, an entire community is learning the joys of having a dog.

For Christmas, Pasay Pups is making a special delivering to the neighborhood - about 500 gift packages for children.

Every pack will have a coloring book that teaches kids how to care for animals, as well as educational toys, school supplies, a hygiene item and snacks.

And, of course, there's the most important ingredient - a sense of hope for both humans and dogs alike.

"I really believe that the world would be a better place if everyone just did what they can to help others," Fruno says. "For me and the other Pasay Pups volunteers, we're just doing what we can."

Think you might like to help Pasay Pups in this mission? Consider supporting the group's Christmas fundraiser .

Watch a video of the Pasay Pups Christmas fundraiser below: 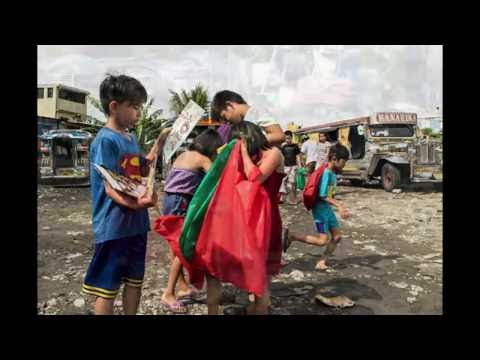