If you believe, anything is possible.

Video footage of a great horned owl taking what looks like a meditative dip in Lake Michigan has proved that saying to be true, giving hope to birds around the world who have spent their entire lives flying over bodies of water, but not plunging in. 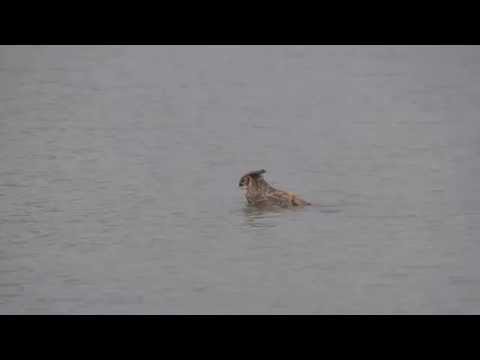 Well, sort of. This is definitely an unusual phenomenon - at least, it's unusual that someone witnessed it. Photographer Steve Spitzer posted the footage to YouTube this week, where it promptly created a sensation. He said that the owl had been forced out of the air by two peregrine falcons. On Facebook, Spitzer addressed the video's popularity, saying, "If I had known he would be so popular, I would have shot a longer video."

The footage, shot on the beach at Loyola Park in Chicago's Rogers Park neighborhood, is unusual for a few reasons. For one, great horned owls are nocturnal, and peregrine falcons are diurnal - meaning they normally stay awake during the day. So how did these two species even meet in the first place? There's a good explanation for that, according to Geoff LeBaron, director of the Audubon Society's Christmas Bird Count and an expert on predatory birds.

"This time of year, the young great horned owls are getting evicted from parents' territories," LeBaron told The Dodo. "They are also learning to feed and do everything on their own, so they may be more food stressed and searching for food in the daytime."

But unfortunately for this owl, peregrine falcons are territorial birds. It's likely that the falcons saw the owl blundering through their territory, and didn't want the competition. Spitzer told Chicago's WGN-TV that a bird rescue team was called, but the owl was able to fly away before they arrived.

So that brings us to the question of the hour: Can owls swim? Clearly, the answer is yes, though LeBaron said he's never seen anything quite like this before. Lots of predatory birds eat fish, though, so it's not uncommon for them to get bogged down in the water.

"This rowing behavior happens sometimes when these kinds of predators are trying to catch fish in the water and get waterlogged enough so they can't take off," he said. Ospreys, who are excellent fish-catchers, have been observed doing this several times in the wild.

LeBaron also noted that when a bird's catch is too big to carry - and too juicy to let go - eagles and other birds will swim with it toward shore. This video (as well as a bunch of others) is proof: 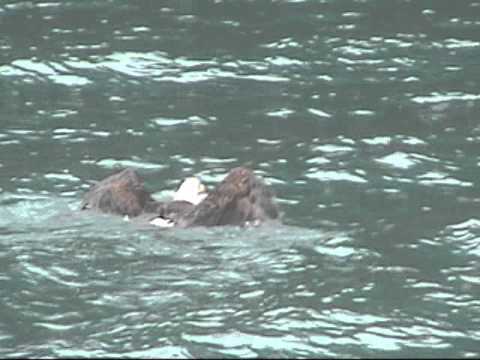 While great horned owls are not fish-catchers and wouldn't normally have to deal with getting their toes wet, there are some owls who do so happily. For the Blakiston fish owl, a species native to Asia, taking a dip is all in a day's work. 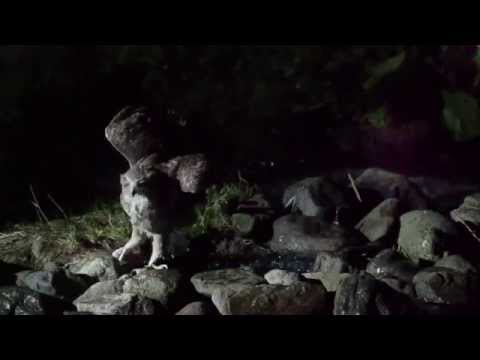