Starving Orphaned Ape Learns To Trust Again, Thanks To Her Patient Friends

The tale of a bonobo named Lomela is a harrowing look at the sad trade in great apes - and how one animal survived it despite the odds.

Lomela was 6 years old when she was rescued by a bonobo sanctuary in the Democratic Republic of Congo (DRC) called Lola Ya Bonobo. She was discovered in the city of Lodja by an employee of the sanctuary. Her mother was dead - she had been killed for the bushmeat trade, which is considered the greatest threat to wild bonobos - so Lomela was an orphan.

Lomela had been spared from the bushmeat trade only because she was too small to eat, says Vanessa Woods, author of "Bonobo Handshake" and a longtime researcher at Lola. "Lomela had kwashiorkor, a type of malnutrition, so she looked like a famine child, with a swollen belly and stick-like limbs." When Lomela arrived at Lola, Woods told The Dodo, "her head was too big for her body and her eyes bulged out of their sockets. She was completely naked except for a tuft of hair on her head."

In fact, Lomela was so malnourished, Lola thought she was 3 years old - and only later realized she was actually 6.

Lola Ya Bonobo is a unique place: a bonobo rescue, rehabilitation and release center in DRC, the native homeland of the species. There are estimated to be no more than 20,000 bonobos left in the DRC wild, and they are relegated to the Congo Basin.

Bonobos are listed as endangered on the IUCN Red List as well as on Appendix 1 of CITES, which means it is illegal to trade in them. However, bonobos, chimpanzees, gorillas and orangutans are all trafficked heavily around the world nonetheless.

A comprehensive 2013 report by the United Nations Environment Program (UNEP), "Stolen Apes," expounds on the dreadful trade, which is lorded over by traffickers who have carved out effective routes to shuttle the apes from Africa to the Middle East, Asia and beyond.

The report provides examples of the horrors of the trade. In one especially heinous account, infant apes were confiscated by officials at the Cairo airport in 2001, and despite "urgent efforts" by animal welfare NGOs, the baby apes were euthanized by drowning them in a vat of chemicals. In 2006, a young chimpanzee was found during a crime bust in Cameroon - wedged between sacks of marijuana in the trunk of a car. Over the past few years, investigations have unearthed a trail of nearly 140 chimpanzees and 10 gorillas being illegally trafficked to China, some headed to spend their lives behind bars in zoos.

Naftali Honig, who is director of the Project for the Application of Law for Fauna, Republic of Congo, has seen the results of the trade firsthand in Africa. "Great apes are traded for everything," Honig told The Dodo. "In Cameroon there is a large trade in ape skulls. In Congo there are still a number of cultures that consume great ape meat. In Gabon, one of the most significant great ape sting operations ever conducted saw the seizure of a dozen heads and other great ape body parts."

In the great ape range states of West and Central Africa and Southeast Asia, the pet trade is the most common type of live trade, according to the UNEP report. Some residents purchase great apes from traffickers to save them from slaughter or abuse, or to keep them as household pets, while the international trade is driven by wealth: "Drug lords and dictators ... business magnates, share an urge to flaunt their riches by displaying exotic animals for personal pleasure and [to] impress their friends."

Apes are smuggled by airplane or ship to various destinations, and "on board, the great apes will remain in the same cage for a long period of time." They often die during their transit.

In fact, the report notes, that for every great ape who is confiscated - meaning seized by authorities and transferred to legal captivity - an overwhelming number die. For every bonobo confiscated, for example, five to 10 adults are assumed to have perished. According to the UNEP report, over 3,000 chimpanzees, gorillas, orangutans and bonobos "disappeared each year [between 2005 and 2011] from the forests of Africa and Asia through illegal hunting and trade."

Daniel Stiles was the lead author of "Stolen Apes." His work has mainly focused on the ivory trade, and he told The Dodo that it's "not easy to connect the gleaming white objects with the elephants that had to die to produce them." He says, however, working on the great ape trade easily produces that awareness:

With great apes the subjects of the trafficking are living, breathing creatures. I can see the intelligence in their eyes, and the self-awareness that they know they are in a terrible place. They are traumatized and often lonely. I know that many of them were in their mother's arms when the mother was shot for meat. Some even witnessed their mothers being butchered before their very eyes, her bloody pieces stuffed into bags for transport to market. The babies also get stuffed into bags or boxes and taken to someplace horrible where they are chained up while the poacher looks for a buyer. Eventually the long journey begins. I hate looking at great apes living behind metal bars, serving a sentence for a crime they did not commit. I would have to say that I am more concerned about great apes than any other species.

Sadly, Stiles says, great apes are not being given the attention they deserve: "My greatest disappointment is that most people do not share my concern. Great apes are usually neglected in all of the fanfare surrounding wildlife trafficking."

Stiles' words show just how devastating wildlife trafficking is for apes like Lomela, one of the 52 bonobos at Lola Ya Bonobo. According to the organization, not only do the bonobos have a nursery, medical attention and a 75-acre forest, they all will receive "lifetime care."

They also receive what they might need more than anything: surrogate mothers: "Just as crucial as physical treatment is psychological care," explains the organization. "The bonobos who arrive are often extremely traumatized by the loss of their mothers and families. We have lost more than one orphan to sheer stress. To combat this, infant bonobos are immediately given to a substitute mother who gives them all the love and reassurances they need to survive." Lomela was initially given to a human mother named Mama Henriette.

Equally important is the tenderness that other bonobos show toward the newest and neediest members, says Woods: "One afternoon, I saw a 2-year-old bonobo called Mwanda sit next to Lomela, gently pick up Lomela's foot and kiss it ... [Lomela's] eyes were strangely vacant."

Eventually, Mwanda moved closed to Lomela. And then cuddled her. And after a while, says Woods, "Lomela's scrawny arm curled around Mwanda's shoulders, and they sat side by side for the rest of the afternoon."

But, then, Lomela took a step that few from Lola ever take: release. The sanctuary wrote in a triumphant update:

Because of her strong sense of survival, resourcefulness, and sweet disposition, Lomela was chosen to be part of the world's first release of bonobos back into the wild. She has thrived at the release site, and has been instrumental to its success. Two years after her release, Lomela had a baby of her own. Born in the wild, Lomela's baby is the sum of all our hopes for orphans who arrive on our doorstep. It is one small triumph for us, but a huge one for Lomela and her baby, who are finally safe and free.

According to Woods, Lomela is still with her baby in the wild.

Watch an emotional video by the Great Ape Survival Partnership-UNEP: 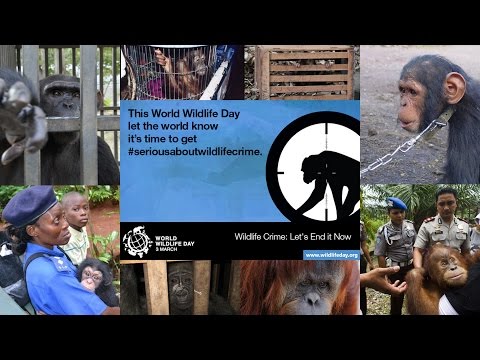