Orphaned Orangutans Become Best Friends, Will Never Have To Be Alone Again

Budi, the little orangutan who was rescued from a brutal life in a chicken cage, has made very his first friend.

Neither Budi nor his new pal Jemmi have met another orangutan since being taken from their mothers as babies, and they're a little bit uncertain about what it means to hang out, as seen in a video released by the International Animal Rescue (IAR).

However, the pair quickly warms up to each other, and they start to tumble around as only toddlers can.

This new friendship is a great step forward in the recovery of these two orphans, who both had a rough start in life. Budi, who's now around 1 year old, was rescued in January after spending the first 10 months of his life as someone's pet in Indonesia. He was fed only condensed milk and kept in a tiny cage. His little body was malnourished and swollen when he was rescued, and he'd cry out in pain when anyone would touch him.

Thanks to the hard work of his rescue team, who at first didn't know if he would survive, he's been improving. Just last month, he took his first wobbly steps.

Jemmi, who's just a few months younger than Budi, was also rescued from life as a pet. Turned over to the rescue at 4 months old, he had spent much of his young life tied up in a box.

Though these two lucky orphans appear to be thriving, their sad pasts are reminders of the pressing threats orangutans face. Orphans are not uncommon, since female orangutans are often hunted so their babies can be sold as exotic pets.

Fortunately, groups like IAR are helping where they can. If you'd like to help fund the care of Budi, Jemmi and other orphans like them, you can make a donation on the IAR website. 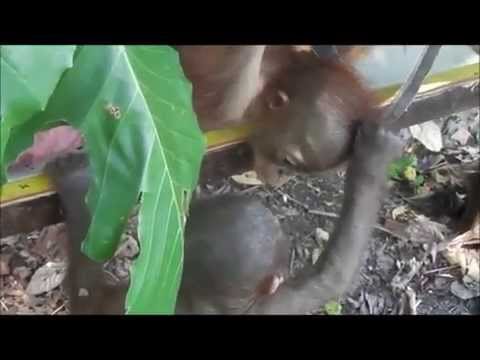