What do you do when everything you've called home disappears before your very eyes?

This year, wildfires in Indonesia destroyed five million acres of forest and the homes of countless animals.

One of those animals was Mata, a 20-year-old male orangutan found on a burned-up banana plantation.

He managed to survive the flames, but when the fire died out, the place he called home had been turned into a barren wasteland.

"The forest around him is totally devastated; all we see is black ash, soil and plantations. There are no more big trees. If we had not rescued Mata, he would have been left to starve and die, or would have been shot by a farmer," wrote International Animal Rescue (IAR) in a Facebook post.

"The saddest image you can think of is a magnificent orangutan that should be travelling in the top of the canopy but instead has to drag itself on the ground, struggling even to find a standing tree suitable to make a nest," wrote Gail Campbell-Smith, program manager of IAR, in Indonesia.

IAR rescuers darted Mata with a gentle sedative to keep him safe during the rescue.

He ran off for a moment, then collapsed to the ground.

They checked his heartbeat, examined his health and tagged him.

Then, they prepared for their journey to relocate Mata. They carried him from the devastated forest to a transport vehicle.

It was a treacherous journey, but the rescuers proceeded with extraordinary caution.

When they reached the road, they placed the sedated Mata into a travel crate.

They put Mata in the back of a truck and drove him to the rehabilitation center.

Currently, IAR is housing Mata in its center as it searches for new home for him: a home where an orangutan can thrive.

IAR has successfully released many orangutans back into the wild after tragic scenarios such as Mata's.

Below, a mother and child orangutan are released back into wild, full of trees for climbing, which is the very first thing this family does once they are free again. 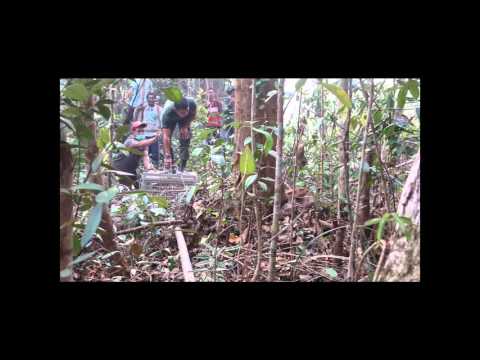