This is the sad, sweet face of captivity.

Joss, a roughly 2-year-old orangutan, was recently rescued from life as an exotic pet by International Animal Rescue (IAR). And her past left her absolutely broken.

"She has a haunted, fearful expression in her eyes," IAR wrote. "[She] is so deeply traumatized by her past that she has developed a number of distressing coping behaviours."

A video shows just how psychologically damaged the little ape is. She hugs herself tightly as she violently and willingly slams herself into the floor. She picks herself up over and over again, each time collapsing to the ground. When a carer reaches out to comfort Joss, she scoots away onto her elbows and bangs her head into the wall. 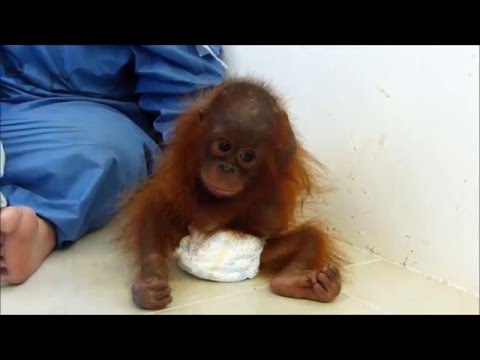 But the saddest part is how, throughout it all, Joss keeps her tiny baby arms wrapped firmly around her body - a reaction, IAR says, to losing her mother at such a young age.

"Joss hugs herself constantly because she misses the physical contact and comfort she should still be getting from her mother," Jaclyn Eng, a veterinarian with IAR, said in a statement. Like many exotic pets, Joss probably watched her mother be slaughtered so the infant orangutan could be sold into captivity.

"[This] shows the heartbreaking reality behind keeping an orangutan as a pet," IAR wrote. "We are lost for words."

According to IAR, Joss was purchased by a man in Borneo for around $36. He told IAR he didn't know keeping orangutans was illegal and felt sorry for her, and kept her in the house with his wife and children.

"It seems that Joss was treated like a toy or a teddy bear by the children," IAR said. "She was carried around, hugged and squeezed, with no understanding of how frightening and distressing this must have been for her."

When he realized it was illegal, he turned Joss over to authorities. But it was too late.

"Joss's life up until now must have been very traumatic and stressful for her to behave in this abnormal way," Eng said. She adding that her team has never seen such a young orangutan exhibiting such severe stereotypic behavior - abnormal patterns that animals develop to cope with the stress of captivity.

"It is extremely distressing to watch because it must reflect the mental and emotional trauma little Joss is suffering," she added.

Joss's case is unusual because her psychological trauma is so visible. But the tragedy of her story is anything but unique; IAR regularly rescues baby orangutans who bear severe physical and emotional scars from their time in captivity.

Early last year, IAR saved a young orangutan named Budi who had been living in a chicken cage. His limbs were so swollen and stunted from malnourishment that he would scream in pain whenever someone touched him. In October, the team took in a baby orangutan named Gito who had been left out in a urine-soaked box to die; he was so covered in mange they described him as "mummified."

And these are just the stories that get told. Each year countless infant apes and other animals are stolen from the wild and sold into captivity. Once there, they face malnourishment, neglect, cruel cages and sometimes outright abuse.

The situation is also getting worse. IAR has seen a sharp increase in incidents in recent years as orangutan habitats are decimated for palm oil plantations. The resulting deforestation has caused wildfires to sweep through the remaining forests, leading more and more of the reclusive apes to come into contact with humans.

Gito, a young orangutan IAR rescued last year after he was left out to die in a cardboard box.International Animal Rescue

Not only is that terrible news for the individual orangutans - for whom contact with humans is often a death sentence - but it's also worrisome for the future of the species. Orangutans have lost up to 80 percent of their population in the last century, with the death rate increasing significantly in recent years.

But for now IAR's team is just focused on helping little Joss, who started life with everything against her, regain the life she was destined for - though they're still figuring out the best way to interact with the shattered baby.

"At first we tried to comfort and hold her but she was obviously so stressed in her new surroundings that she did not want us to touch her," Eng said. "We also tried to settle her down with a giant cuddly teddy bear but that didn't help either. She just kept banging her poor head against the wall."

Yet the team recognizes that psychological wounds can be more difficult to heal than the physical ones, and is determined to do their best to guide little Joss through the years-long process it will take for her to heal.

"Our team are doing all they can to ease Joss's suffering; she requires constant supervision and distraction," IAR wrote. "Only time will tell whether she will make a full recovery from such a terrible start in life."

To help IAR care for Joss and the other orphans in their care, you can make a donation here.