Pregnant Opossum Clings To The People Who Saved Her Babies

Judy Obregon knows an opossum when she sees one. There is one who visits her porch regularly.

While driving down her block on February 20 heading to her mother-in-law's house, she stopped as she saw what she first thought was a dead opossum in the road.

Until the little one lifted her head. And looked toward Obregon.

It was as if the opossum knew Obregon was there to help.

"I knew I could not walk away," she said.

As the founder of The Abandoned Ones "Saving Animals in Danger" animal rescue in Fort Worth, Texas, Obregon has been rescuing dogs mainly from a known dog-fighting area in her city. However, if an animal needs help, regardless of species, Obregon springs into action, as she did with the opossum.

Obregon got out of her car and walked over to the opossum and saw a trail of blood leading from a driveway to the animal while a bloody stick lay nearby. Her gut told her the animal had not been hit by a car and that the opossum was a "she" carrying babies.

The opossum kept struggling to lift her head and tried to walk, so Obregon helped gently push the animal to the side of the road to prevent a mishap with a car. Obregon ran to her own car to grab a T-shirt to cover the opossum for warmth.

She then got on the phone and started reaching out to find someone who could help. After calling DFW Wildlife Coalition, she was given a list of numbers for local wildlife rehabilitators and finally reached Tabatha, who lived within minutes away.

While she waited for Tabatha, Obregon knew it was most important to find a box and get the opossum safe and warm.

Since she was a block from her mother-in-law's house and her husband was there, she got him to watch the opossum while she ran inside to get a box.

Obregon wanted to make sure not to hurt the animal.

The opossum was so tiny. So fragile.

"I put the box down to see if the opossum would crawl into it," she said. "I put it in front of her and used my hands to guide her into the box." The opossum struggled but crawled inside as if she knew she was being rescued, according to Obregon, who then carried the box about a block back to her mother-in-law's house where she sat in front and waited. 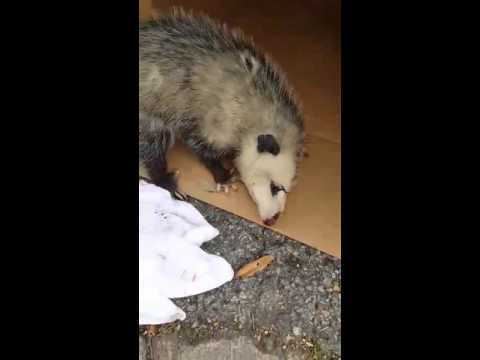 "It was so emotional," Obregon said. "I do rescue work all the time, but to see another rescuer do what I do was so heartwarming."

Tabatha is a wildlife rehabilitator who is in her fourth year of helping to rehabilitate a variety of animals, from opossums (the only marsupial in North America) and squirrels, to minks and raccoons. She and her husband Ronnie each have a sub-permit (they work under someone who is permitted) with the state of Texas, whereby they are taught everything necessary to rehabilitate animals from feeding, triage and how to determine if an animal needs veterinary care to nutrition, cage setup and releasing an animal back into the wild. Tabatha is in the process of applying for her own permit.

First Tabatha verified that the opossum was female and that she did have joeys (or babies) in her pouch. Joeys are born blind, bald and completely defenseless; they weigh about 3 to 4 grams and develop in their mother's pouch for 60 days. Tabatha covered the opossum, who Obregon named Angel, with a blanket and placed her safely in a carrier and took her home.

A plan for Angel to recover

Upon arrival at her home, Tabatha took Angel out to check her thoroughly and found no broken bones or heavy bleeding. "I could tell on evaluation of her that she was struck, and I'm pretty sure she was shot with a BB gun," Tabatha said. There were about four teeth that were damaged and a spot on the roof of her mouth where the BB hit. Since there was no exit wound, Angel most likely swallowed the BB.

Tabatha called the wildlife veterinarian with whom she consults and talked over the case and determined Angel did not need to go into the office. On the vet's advice, Tabatha administered some pain medication and fluids, cleaned Angel's wounds, placed her in a cage and fed her some vegetables, fruit and chicken. "You can tell her mouth is sore, but she has been eating and drinking on her own, which is great news."

She also checked on Angel's babies, who were OK. However, she was not allowed to remove them as that could be dangerous for the babies.

Opossums oftentimes get a bad rap, but a little education can go a long way.

For starters, it is highly unlikely for them to carry rabies, according to Tabatha, as their blood temperature is too low to sustain the virus. Most often they are scared of humans and are not aggressive.

Tabatha has been evaluating Angel at night because opossums are nocturnal. She wants to ensure Angel is calm and there are no loud noises. "Right now she is scared and you can tell she is hurting," she said. "She is very sweet. Opossums have a very shy demeanor."

When scared, opossums will hiss and open their mouths very wide. "If that doesn't work they can play possum, which is play dead and they actually have glands on their anus that secrete a very stinky, horrible smelling fluid to make them smell dead." Typically if you leave them alone, they will leave an area, unless there is food.

Although Tabatha feels that Angel was hurt by humans, "She has not tried to bite me once," she said. "She knows I am here to help, not to hurt her. I think she has a very good chance.

"My goal is to make sure she doesn't get an infection, add a little weight to her, and release her and her babies together as soon as possible," which most likely will be another week or two as long as Angel continues to heal. Tabatha knows a man who loves wildlife. He has 60 acres and hunting is prohibited, so she will release Angel on his property.

Rescuing Angel was "not one of my typical rescues because I rescue dogs and cats," Obregon said. "This is out of the ordinary for me, but I wouldn't have avoided her for that reason. She is still an animal with a beating heart, and it was still beating when I got to her."

If you find an injured wild animal, the Humane Society of the United States has information to help. You can also contact your local parks and wildlife organization for information and a list of rehabilitators in your area, or call your local animal control. If you ever bring wildlife to a rehabber, please leave a donation as they are self-funded.

Update: Angel is fully healed and was recently released onto "human friendly" private property. Click to see how she's doing.