“They’d showed so much initiative ... they deserved to live, those rabbits."

When floodwaters rose in New Zealand’s South Island, three wild rabbits got a helping hand, or hoof, as the case may be, from some animal friends.

The plucky cottontails caught a ride on the backs of some very helpful sheep and, together, were able to make it to higher ground safely.

The rain was still coming down when Ferg Horne, a 64-year-old farmer, decided to check on his neighbor’s flock of 40 sheep Saturday morning. Flooding throughout the Otago region had prompted evacuations, road closures and the declaration of a state of emergency — and Horne was far from optimistic about what he’d find when he reached the poor animals.

When Horne arrived, however, he was pleasantly surprised to see the sheep still standing, along with three odd, dark spots perched atop the sea of white wool. The sight confused him, as his neighbor “didn’t have any black-faced sheep,” notes the Associated Press.

Upon closer examination, Horne discovered that the spots were, instead, furry hitchhikers, and he knew he had to gather proof of the remarkable sight. Horne shot a brief video of the great rabbit rescue on his smartphone, which he later sent to his son. The clip found its way to Facebook and a local paper, and the incident has since gone massively viral. 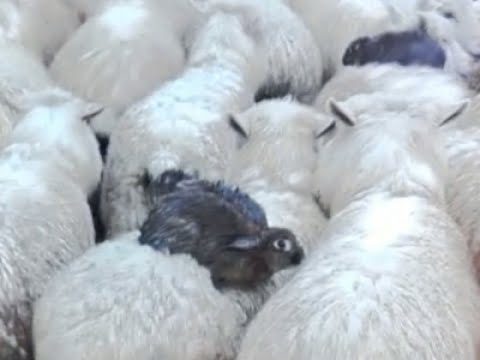 The video shows the sheep crowded together on a high spot in the farm, standing in approximately 3 inches of water. Two damp rabbits perch on one sheep, with a third riding another. As a farmer, Horne generally considers rabbits to be “pests,” but he admired their gumption and survival instincts so much that he saw no need to interfere. “They’d showed so much initiative, I thought they deserved to live, those rabbits,” he told the AP.

Horne herded the sheep to dry land, and the rabbits attempted to surf on the sheep for as long as they could, before hopping into a nearby hedge and disappearing, safe and dry.