People Shocked To See Hundreds Of Goats Stampeding Through Their Neighborhood

There were 200 excited goats — and one very confused dog 😂

A herd of 200 goats was finishing up a grazing job in Issaquah Highlands, Washington, on Tuesday evening, getting ready to move on to their next assignment. The goats belong to Healing Hooves Natural Vegetation Management, and they help clear vegetation in spots that are too difficult for equipment or human workers to reach safely. They’re normally very good at their job and well-behaved — but that evening, the herd was feeling a little bored, and decided to mix things up.

Craig Madsen and Sue Lani Madsen, the owners of Healing Hooves, had been planning on moving the herd to a new pen the next morning, but somehow, the entire herd managed to escape instead.

“They decided they wanted to move sooner,” Sue Lani Madsen told The Dodo. “Probably one jostled another and a fence post was knocked over. One saw the opening and the rest followed.”

Suddenly, all 200 goats were running down the street, stampeding into a nearby neighborhood, and residents were shocked when they stepped outside and saw the herd passing through.

“We're not quite sure why they turned the corner,” Madsen said.

It was a hilarious sight to see, 200 goats all flooding into the street and onto people’s lawns — and bringing up the rear was Gigi, one of the herd’s livestock guardian dogs (LGD), who seemed incredibly sheepish that she’d somehow let this happen under her watch.

Luckily, Healing Hooves has always cautioned its neighbors about what to do if their goats ever escaped, and so immediately everyone sprang into action.

“We've emphasized over the years how some ornamentals found in yards (rhododendrons, azaleas) can be toxic to goats,” Madsen said. “Neighbors immediately started trying to keep them out of yards and kept them moving … and led to the Bark Park. Really handy to have a fully fenced dog park nearby and on the route they seemed to want to go!”

By the time the goats had reached the dog park, their handlers had heard about the grand escape and ran out to try and corral the herd, with the help of Gigi and another LGD dog, Nessie. By that point, it seemed that the herd was already tired of the escaped life, and it didn’t take long to get them all safely contained again. The whole ordeal only lasted about half an hour before they were mostly all back where they belonged.

None of the goats were hurt during their adventure and are back to business as usual — but of course, they’ll never forget their evening of excitement, and may decide to plan another escape somewhere down the road.

Check out the full video of the great goat escape below: 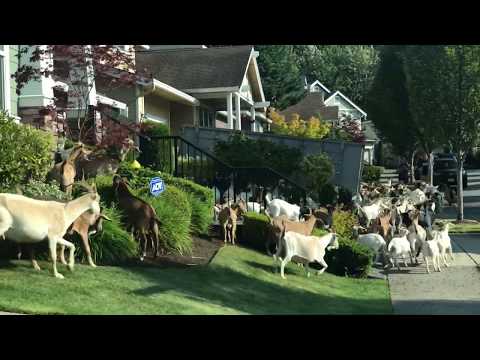