After reviewing the undercover footage, Dr. Ian Duncan, professor emeritus at the University of Guelph, said, "It is not appropriate to kick, punch or swing birds. This is gratuitous cruelty."

Hybrid Turkeys responded to the allegations by suspending four employees who appear in the footage, including a supervisor, and launching an investigation -- though none of the employees have been terminated.

"As soon as we had evidence that this was going on in the barn, we took immediate action and we suspended the employees that were involved, because they were not adhering to our welfare practices, and zero tolerance for us means zero tolerance," said Helen Wojcinski, a spokesperson for Hybrid Turkeys. "We feel this is an isolated incident. Employees have been trained. They know what they're supposed to do. There is obviously a lapse. There's been a mistake made here."

But Geoff Urton with the B.C. SPCA told CBC said that the problem is not unique.

"There's a gaping hole in the system with regard to monitoring and inspection of these farms across Canada," he said. "There's not much being done right now and it's a major concern. SPCAs in Canada who do animal cruelty law enforcement, we have an inspection mandate for farms in Canada so we would respond to complaints as they come in. But generally, that would take a whistleblower to come forward, and actual animal cruelty complaints."

You can sign a petition on the group's website asking the National Farm Animal Care Council to stop the abuse of turkeys. 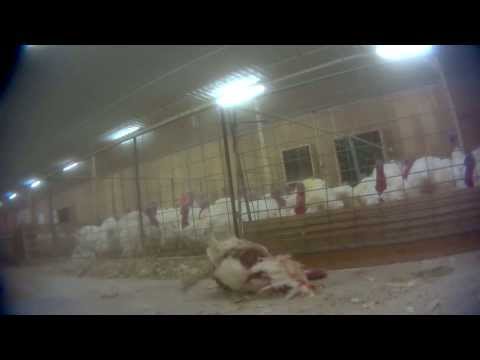