Mother Whales Bring Their Babies Within Feet Of Paddleboarders

Mothers instinctively protect their young, but two mothers must've sensed no danger when they crossed paths with two paddleboarders off the coast of Laguna Beach, California.

They swam within a few feet of each other.

"I paddle with whales almost every day," Rich German, the man on the bright orange paddleboard in the video, told The Dodo. What made this day different was that German's friend Mark Girardeau was in a nearby boat with his drone to capture the encounter from high above as German filmed from his board.

"They were moving super slow," he said. "I love that they feel safe. They would bring the baby right over to us. Obviously, they realize that we're no threat to them, and that's just a pretty amazing, magical experience."

"They seemed kinda curious," Girardeau, the drone operator, told The Dodo. "They didn't seem scared or anything. It was just like the paddleboarders were one with nature."

Whales aren't the only ones who feel comfortable approaching German. Here's a photo of a dolphin swimming just below his board.

With their newborns by their side, these whales are following the same path that mothers and their young make each year, from warmer waters up toward Alaska, where they'll spend the summer and fall.

Hopefully the rest of their journey will be as peaceful and steady as their encounter with the paddleboarders from California.

Enjoy the full video of the encounter below. 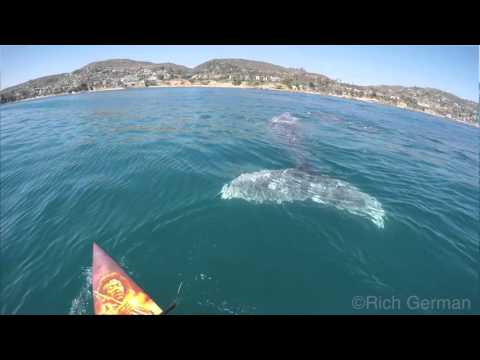