She couldn't live without him.

When Karma the cow was rescued from terrible conditions at a small farm a few years ago, she should have been happy. But she wasn't. For the first day and night she wouldn't stop crying, baffling rescuers as she filled the air with mournful pleas.

It wasn't until the next day that rescuers at California's Gentle Barn Sanctuary noticed something: Karma's udders were full of milk. They quickly realized that she must have had a baby who was left behind at the farm, so they rushed to call her former owners.

Karma did have a little baby - who was on his way to the butcher. In a stroke of luck, the car he was being transported in broke down, and rescuers were able to claim the little calf.

What followed was a stunning reunion that shows just how strong a cow's maternal love can be. The moment Karma sees the trailer approaching, she instinctively jumps to her feet and begins to call out. As soon as she sees him, she rushes over to the fence, desperately trying to reach him through the barrier.

Her little calf is excited too, jumping and straining at his lead as he tries to reach his mother. Unfortunately, weakened by hunger and his time away from mom, he collapses at her feet when they finally meet. But after some gentle nuzzling from his mother, he fights his way back up and is soon cuddled up to her and nursing again. 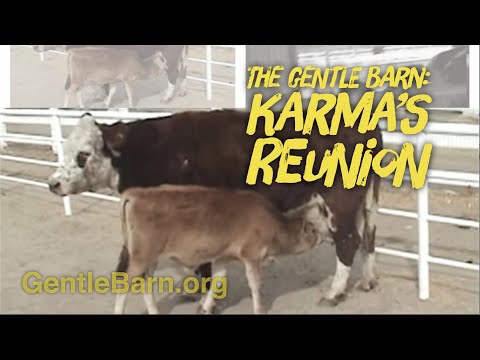 Each year, millions of calves just like this one are separated from their loving mothers, and most never get the chance to reunite. If you'd like to help care for Karma and her now-grown son, who are still living happily at the sanctuary, you can click here to donate.