Animals Starving In War-Torn Zoo Get Help Just In Time

"Although alive, both animals look miserable."

Among the ruins of Mosul, Iraq, long destabilized and shattered by war, is what's left of a zoo - and just a lion and a bear are still alive.

But this week, help came for Simba and Lula, bringing the two animals back from the brink of death.

A team from Four Paws International arrived at the Montazah Al-Morour Zoo in Eastern Mosul and found it in "a disastrous state," according to a statement from the organization. "It was obvious that no one had cleaned the cages or provided the animals with veterinary care for a very long time," the organization said.

It's estimated that Simba and Lula have hardly had any food recently, except for when Dr. Sulaim Tameer Saeed, founder of the Kurdistan Organization for Animal Rights Protection (KOARP), managed to coordinate two shipments of chicken meat and fruit and vegetables to the animals, according to Saeed.

"On February 2, I got an email from some people inside Mosul asking [for] emergency help for three animals, two lions and one bear, remaining without food more than 60 days," Saeed told The Dodo. Presumably, the other lion passed away before Four Paws arrived this week.

A veterinarian with the Four Paws team, Dr. Amir Khalil, rushed to administer treatment to Simba and Lula.

"Although alive, both animals look miserable and are suffering from many diseases caused by malnutrition and lack of veterinary care," the organization said. "Both the bear and the lion have very bad teeth, in addition the bear suffers from pneumonia and the lion has ill joints."

It's possible Simba and Lula are still alive thanks to the kindness of Mosul residents and local volunteers, who brought scraps of food to the starving animals, even though they could hardly find enough to feed themselves.

But when the fighting worsened, many had to flee to save their own lives, leaving the animals behind.

"The battle lasted for three or four months. There was a guard that used to come and feed them," the park's owner, known as Abu Omar, told Reuters.

Despite the help, most of the animals at the zoo still died, one by one. A lioness, monkeys and rabbits were either killed by the fighting or starved to death.

Now that the Iraqi army has retaken the region from ISIS, Four Paws veterinarians were able to come in and treat Simba and Lula. The rescue team was also able to coordinate food for the lion and bear for the next four weeks.

This will give the animals time to gain their strength while Four Paws figures out the next steps for them.

"We are definitely very happy that we could give the animals first aid and provide them with food for at least the next four weeks," Claire LaFrance, a spokesperson for Four Paws, told The Dodo. "We are looking into the possibilities of future treatment of the animals."

To help the last two animals in this zoo, and to support the other rescue work Four Paws does, you can make a donation. 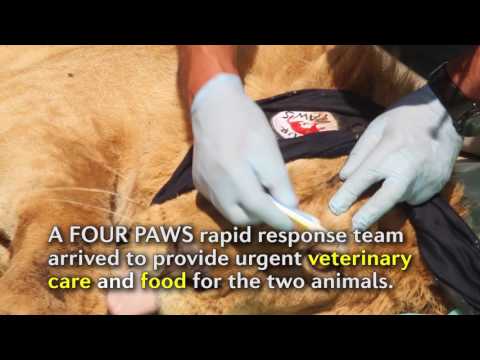