The footage taken at Maple Lodge Farms shows workers sending cages through industrial-strength washing machines with live chickens still in them. Other footage shows chickens being violently slammed into shackles, freezing to death during transport to the slaughterhouse and having their necks slit while still conscious.

"This is some of the worst footage that I've ever seen," Krista Osborne, managing director of activist group Mercy For Animals Canada, which conducted the investigation, told The Dodo. The 6-month investigation ended in February. 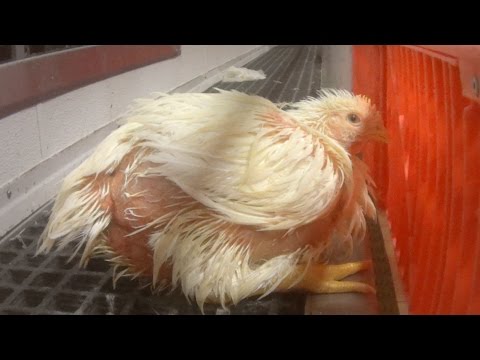 In a video posted on the company's website, Maple Lodge Farms CEO Michael Burrows said that the company was investigating the "disturbing" allegations and would take appropriate action to prevent future violations, including dismissal of employees and changes to welfare practices.

Osborne said that if Burrows were serious about animal welfare, he would work quickly to stamp out some of the institutionalized cruelty present in his company.

"This is the ninth investigation that we have done in Canada, and every single time we have gone undercover behind closed doors in a factory farm we have seen egregious abuse," Osborne said. "This is not a one-time instance. This is a systemic issue throughout the industry and a systemic issue at Maple Lodge Farms."

Mercy For Animals Canada is asking concerned viewers to sign a petition for Maple Lodge Farms to improve their welfare standards. You can find it at maplelodgeharms.ca.