Eugene Bostick may have officially retired about 15 years ago, but in some ways that was when his most impactful work began.

Not long after, he embarked on a new career path of sorts - as a train conductor for rescued stray dogs.

The lively 80-year-old Fort Worth, Texas, native says he never planned on dedicating his golden years to helping needy pets. Instead, it was a duty thrust upon him by the heartlessness of others.

"We live down on a dead-end street, where me and my brother have a horse barn," Bostick told The Dodo. "People sometimes come by and dump dogs out here, leaving them to starve. So, we started feeding them, letting them in, taking them to the vet to get them spayed and neutered. We made a place for them to live."

Over the years, Bostick has taken in countless abandoned dogs. But more than just keeping them safe, he's found an adorable way to keep them happy, too.

While the rescued dogs have plenty of room to run and play on Bostick's farm, the retiree thought it would nice to be able to take them on little trips to other places as well. That's about the time he was inspired to build a canine-specific form of transportation just for them.

"One day I was out and I seen this guy with a tractor who attached these carts to pull rocks. I thought, 'Dang, that would do for a dog train,'" said Bostick. "I'm a pretty good welder, so I took these plastic barrels with holes cut in them, and put wheels under them and tied them together."

And with that, the dog train was born. 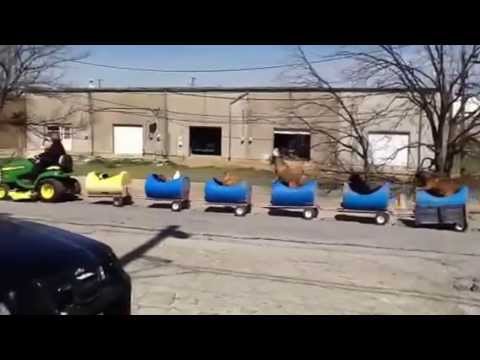 Once or twice a week now, Bostick and the nine dogs currently under his care can be seen puttering down quiet streets around town or through the forest near their home, or stopping by a local creek for some fresh air in the custom dog train. It's something the formerly unloved dogs have come to relish in their happy new lives.

"Whenever they hear me hooking the tractor up to it, man, they get so excited," said Bostick. "They all come running and jump in on their own. They're ready to go."

The dog train has come to attract a fair share of attention among locals who occasionally stop to ask if they can take a few pictures. But for Bostick, it's all about bringing a bit of joy to a handful of dogs who had been through so much before finding themselves as his cheerful passengers.

"I'm getting up in age. I'm 80 now, so I suppose it can't last too much longer, but I'll keep it going as long as I can," said Bostick. "The dogs have a great time. They just really enjoy it."