According to a video making the rounds, it's a magpie. The video shows a little pup and his tame magpie friend having an old-fashioned romp together in their backyard.

It's unclear whether this magpie is a pet or just a neighbor who's become friendly with the family: Magpies have a habit of becoming attached to people they like. But it's clear that whatever the case, this pair really loves each other.

They roll around in happiness for a minute ...

... before deciding to wrestle.

Which turns into quite an impressive display ...

... including a surprise attack by the magpie.

At one point they take a break, so the magpie can bring a pretty bough she found into the house.

But then they're right back at it.

Things get serious when the pup steals the magpie's clothespin.

But fortunately it's laundry time ...

... and the magpie finds some new toys to play with.

Of course, most birds probably wouldn't be up for playing like this. But this gal certainly seems to enjoy it, and magpies can definitely hold their own: They're remarkably smart and can be highly aggressive during breeding season, with males regularly attacking pedestrians and cyclists.

You can watch the full video below for much more bird v. pup action. 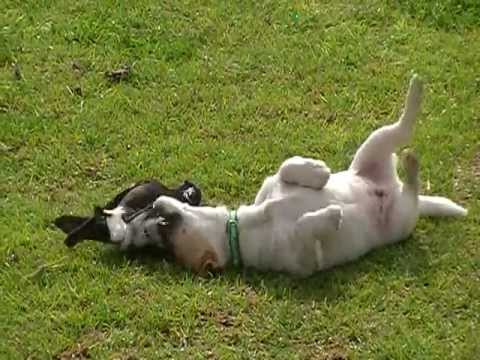