Giant Lizard's Favorite Thing To Do Is Cuddle With His Mom

He won't knock you over when you walk in the door and drown you in welcome-home kisses.

But Scott and his wife Ice know their 20-pound Argentine red tegu loves them - in his own lizardly way.

"He can go anywhere he wants pretty much in the house, but he'll choose to come over and sleep right in front of the couch where our feet are," Scott tells The Dodo.

Love may be about the only thing about MacGyver that's understated. In fact, the scaly behemoth may be the most famous lizard on Earth. MacGyver boasts around 33,000 followers on his YouTube account alone.

MacGyver is so popular, Scott and Ice would prefer not to share their last name, lest anyone get the idea to snatch their prized companion while he's basking in their yard.

And basking in the yard is one of MacGyver's greatest passions in life - again, a subtle, rather understated kind of passion.

"Right now," Scott explains, "he's sitting out in the front yard basking. He'll probably stay out there for a couple of hours. Then he'll go to the bathroom and he'll walk in by himself.

"He is pretty smart," Scott adds. "He's not a genius. He's not quite at the TV series MacGyver level. Put it this way, he is much, much smarter than most people think that reptiles can be."

That's not to say red tegus are a hands-off kind of pet.

"A lot of people are under the impression reptiles are really easy to care for," Scott says. "These guys are not easy."

"Because they get so large, it's nearly impossible to find a prefabricated enclosure that is suitable for them for less than a couple grand," Scott says. "So pretty much everyone builds their own large enclosure that typically runs about $400. On top of that, they are voracious eaters, and youngsters are eating primarily meat, so food costs start to add up a lot faster than some people expect as well."

MacGyver's biggest need, however, is deceptively simple. He needs to bask. Since they're cold-blooded, lizards need the sun to regulate their body temperature, along with the essential dose of Vitamin D it brings. When MacGyver isn't soaking up full-octane sunlight in the yard, he's often basking in a climate-controlled area of the house specially equipped with heat lamps and a humidifier.

Or in the attention of his doting owners.

Scott is no stranger to tegu love. When he was in college, he owned two, a red and a blue tegu. Apart from the obvious color difference, there's little to tell them apart.

But when he moved to Shanghai to start a business, he couldn't take them.

"I had to give them away to a nice reptile-loving family that lived near me, but I was totally in love with them," he says.

He got back to the U.S. in 2012, and met MacGyver soon after. The average tegu life expectancy is between 15 and 20 years.

Knowing tegus are voracious eaters, the couple tried feeding him around 20 different types of ground meat - pheasant, quail, duck, goose - to see what he liked best.

"The only thing he wouldn't eat was llama," Scott says.

He does, however, flash a rare glimpse of passion when grapes are involved.

And dogs? Not so much.

"He's not super afraid of them," Scott says. "He won't attack them. He'll pretty much lay there and do his own thing and hope the dog doesn't get up in his face."

If a dog's pestering him, MacGyver might slither away to a new location. And woe be the dog who still insists on getting in his face. After all, a pesky dog's nose can bear a certain resemblance to one of his favorite dishes.

While lizard love is nuanced - even Scott admits, "it's a tough question because we'd have to go into a long philosophical debate" - MacGyver has always slipped effortlessly into the arms of his owners.

Even as a baby.

And maybe not quite so effortlessly as a grown-up.

MacGyver is a good ambassador of the giant lizard world because he shows us that reptiles, just like mammals, have feelings and crave love and safety. But that doesn't mean you should run out and get one. Reptiles are notoriously difficult to care for, and many lizards just like MacGyver end up dumped each year when their owners give up - which is why adoption is best.

It takes owners who are truly dedicated to their well-being, like Scott and Ice, and who have both the time and financial means to give them what they need to thrive.

Watch the full video of frequently asked questions about lizard ownership below. 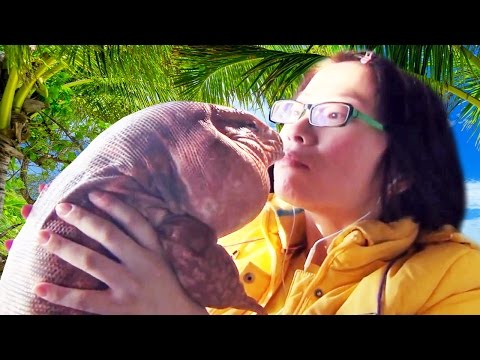