Whales Are Beaching Themselves And No One Knows Why

More than 80 whales have washed ashore on this beach - and no one knows exactly why.

On the south coast of India, the whales have been stuck on land since Monday without any way of making it back home to the sea.

"The cause of mass strandings in pilot whales remains one of the great mysteries in the social behavior of whales and dolphins," C. Scott Baker, associate director of the Marine Mammal Institute at Oregon State University, told The Dodo.

"Although strandings of some species, such as beaked whales, are now known to be the result of human disturbance, such as navy sonar or seismic surveys, the mass strandings of pilot whales seems to be a natural phenomenon that results from their strong social bonds," he added.

That means, he said, that they may be intentionally beaching: "The close social bonds presumably results in a kind of 'herd panic' or 'herd cohesion,' bringing the entire social group (the pod) into the shallow waters and at risk of stranding."

Of the dozens of whales who have washed ashore, 45 have died and the remaining 36 have been pushed back out to sea, Al Jazeera reported.

Seeing their plight, locals have worked tirelessly to help the remaining mammals who are still alive return home.

"The older ones that succumbed to injures returned, but the younger ones responded well," Deepak Bilgi, wildlife warden of the Gulf of Mannar Marine National Park, who led rescue efforts, said to Al Jazeera. "Scientists investigating say it is disorientation. However we have sent one of the whales for autopsy."

With luck, scientists will discover the real reason the whales are beaching, and save more of the animals in the process. 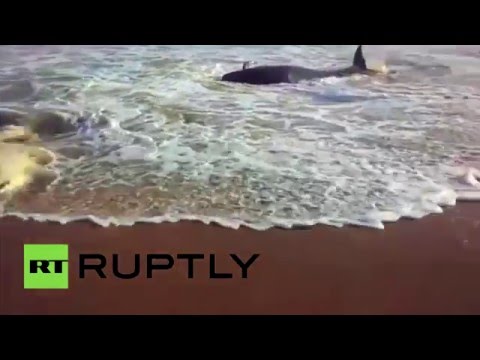 If you'd like to help in protecting and preserving whale populations, check out the American Cetacean Society, a group dedicated to marine education and conservation.