When Bravo reality TV star Lisa Vanderpump isn't adopting rescue dogs, she's campaigning for their rights - most recently, dogs in danger of being killed for their meat at the Yulin dog meat festival in southwest China.

The annual festival, which was founded in 2010 by dog meat traders looking to boost sales, marks the start of the summer solstice for the town of Yulin. Held each June, a major component of the celebration includes the mass consumption of dog meat. These days, only a very small population in China eat dog meat, despite there being a history of its consumption.

"Last year I saw some horrific images on Twitter," Vanderpump told The Dodo. "I knew I couldn't rest without doing something constructive to stop this, to end these horrendous acts. I have an understanding that different cultures eat different animals ... however, this 'festival,' as they call it, is largely about torturing dogs ... many believe that the torture stimulates the adrenaline that makes the meat more tender."

The Guardian reported that up to 10,000 dogs were likely up for slaughter at last year's festival, although opposition to it within China has been steadily rising. Various rescue groups and organizations have put forth efforts and campaigns to transport dogs out of Yulin.

The festival is terrifying for the dogs who face any number of horrors - from being boiled alive and beaten to death, to being stuffed, several at a time, into one small cage, barking and crying in discomfort.

This is why Vanderpump founded the Stop Yulin Forever organization in June 2015, with her husband, Ken Todd.

She also works with her Vanderpump Dog Foundation partners Rick Langley and Dr. John Sessa on the project. Last year, Vanderpump and her team brought two dogs over from China, one of whom was pregnant. To date, the lives of six dogs have been spared.

The names of the two original dogs are Teddy Li ...

"I have many sleepless nights, tossing and turning, thinking about the barbaric torture of dogs that happens during the Yulin festival," Vanderpump said.

"Millions of people are aware of these barbaric acts. We have created a PSA, which Sharon Osbourne has supported me with, a march to the Chinese counsel and have created banners, T-shirts and a website," she said. "We are building an army of supporters. Our next thing is to try and take it to the [Chinese] government." 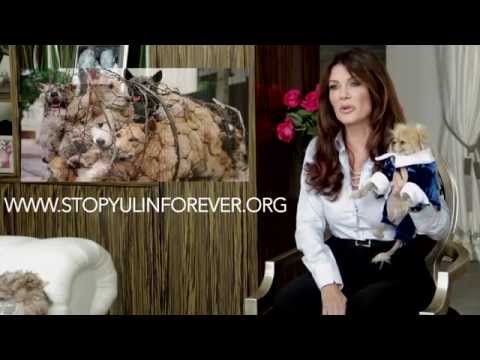 Stop Yulin Forever currently has two campaigns to help keep dogs from being killed in the festival this June, one of which is to rehabilitate a current animal sanctuary in Yulin with up-to-date equipment and staff, Sessa told The Dodo.

The second campaign consists of introducing an alternative to Yulin, called the "Art, Music and Lynchee Festival."

"Our team, including Lisa and Ken, is planning [an alternative festival that] can be used to generate revenue and positive publicity for the town of Yulin," Sessa said. "We are planning to meet with Yulin officials in March to discuss our festival plans and how we can work together to accomplish our goals."

As for the dogs Stop Yulin Forever rescued from slaughter? "They seem to have a sense of thanks toward the people who have adopted them," she said.

"They have a different energy about them when they've been on the other side. I am looking at my little Harrison, who we adopted. He was dumped after Christmas, and he has so much thankfulness in his eyes," Vanderpump said.

"They were saved from the boiling pot."

For more information on Stop Yulin Forever and its campaigns, go here.