Footage shared by the Rancho dos Gnomos Santuário in Brazil shows the thrilling moment a lion named Will experiences, for the first time, the feeling of soil and grass beneath his feet.

Prior to being rescued and taken to the sanctuary, Will had been forced to perform with a traveling circus. For 13 long years, the lion had been confined to a cramped cage and denied any semblance of a normal existence.

Within seconds of his release, Will can be seen eagerly running his paws through the soft soil - tragically, a foreign material for a creature who, up until then, had known only cold metal floors.

Will's reaction to the grass that covers his sprawling new home is equally ecstatic. Despite his age, advanced for his species, the lion rolls around like a happy cub discovering life's simple pleasures.

But perhaps the most touching part of Will's transition into his new sanctuary can be seen in this moment of repose, as if most impressed not by the feeling of dirt or grass, but by a newfound sense of peace.

This scene, which was filmed in 2006, was only the beginning. In 2011, Will passed away of old age, but not before finally learning what it meant to be a lion.

"He had five years of tranquility before he died. Here he had the opportunity to interact with other lions. He loved to lie in grass and look at the sky," sanctuary founder Marcos Pompeo told The Dodo. "He was a very happy lion."

Watch the video of Will's release in its entirety below: 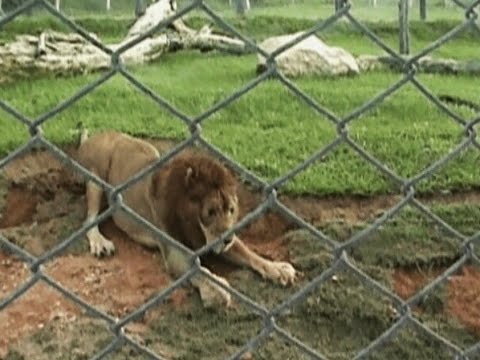