Smart Zoo Knows Exactly Who Should Be In Cages

Finding a way to share the natural world with the world's most probing, curious animals - human beings - is complicated. But one zoo in New Zealand has found a way to let people gawk at wild animals while also putting people in their place.

The tables turn during Orana Wildlife Park's Lion Encounter, which puts tourists in cages to view the wild animals.

The striking image has been making the rounds on the internet, giving voice to growing frustration with traditional zoo practices that keep animals in small enclosures.

"Love it! cage the people NOT the animals! View animals in THEIR own environment not OURS!" one commenter wrote.

Another quipped: "[T]hese animals are responsible for thousands of deaths over the years, but the cats don't even seem frightened of them."

In all seriousness, though, many complicated issues about captivity and conservation arise just from a little thought about this image. "This appears to present a positive change away from the traditional arrangement of animals in cages being surrounded by visitors," Chris Draper, programs manager at Born Free Foundation, told The Dodo. "However, is the lion enclosure any bigger or better than in any other zoo or wildlife park? This set-up might improve the view of the cats for the visitors, but the benefits to the lions are unclear. Does this experience turn visitors into passionate conservationists, or is it just a cheap thrill? Fundamentally, this is a captive facility and these lions will never be released to the wild: They deserve the very best in terms of animal welfare, but let's not lose sight of the need to focus on keeping big cats where they belong - in the wild."

According to Nathan Hawke, public relations manager at Orana Wildlife Park, zoo staff in the cage offer food to the 13 lions, who are kept in a reserve that's roughly 7,600 square meters. "Our trained animal keeping staff are on board the vehicle to feed the lions," Hawke told The Dodo. "However, this feed is not part of their main 'meal' and the cats choose whether to approach the vehicle or not."

Judge this odd phenomenon for yourself: Watch a video of the lion encounter from inside the cage below. 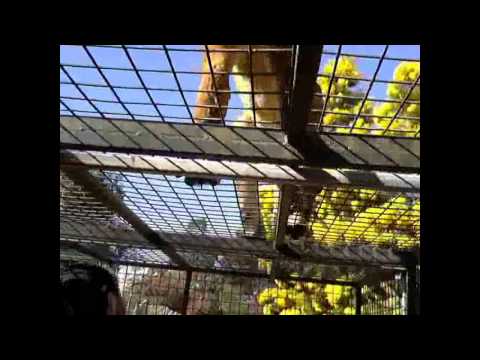