Chimps Abused By Humans Still Have Remarkable Ability To Love

These chimpanzees have been mistreated by humans time and time again - but they still have love for them.

The video below, which was taken in 2013 but is making the rounds again, shows a group of chimps living on a Liberian island. They were formerly used in hepatitis research, but were released by the New York Blood Center (NYBC) after they outlived their usefulness.

Despite their rough treatment, these chimps hold no grudges. In the video, their favorite caretaker arrives on the island to check up on them. They eagerly run up to him, standing upright to wrap him in hugs and hooting happily.

When the rest of the family hears the happy noises, they run up as well, gathering around the caretaker as if in greeting.

Unfortunately, while this video shows the touching kindness of these intelligent animals, their fate is far from pretty. Essentially abandoned after years in labs, the chimps are unable to fend for themselves on the islands, which have few food sources, and rely on human kindness to survive. A second video shows the chimps eagerly grasping at fruit handed out by their caretakers. 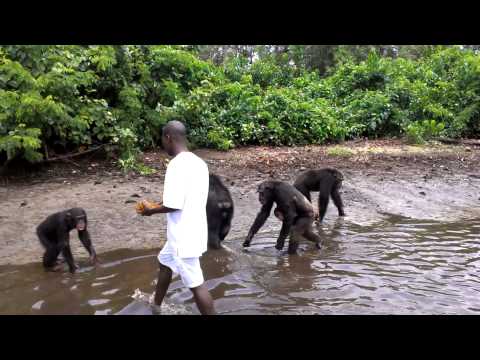 First designated for medical research by the NYBC in 1974, the chimps were used for research for an incredible 30 years. After the experiments ended a decade ago, the NYBC funded the colonies' care through the Liberian Institute for Biomedical Research - paying for caretakers like the one featured in the video to care for the abused animals.

But this spring, the NYBC decided to stop funding the chimp families' retirement - willingly leaving them to starve. The center "never had any obligation for [sic] care for the chimps, contractual or otherwise," NYBC spokeswoman Victoria O'Neill told the New York Times at the time.

The decision sparked visceral outrage within both the academic and activist communities: Jane Goodall penned an open letter condemning the NYBC's decision, which she called "completely shocking and unacceptable," and Duke primatologist Brian Hare told the New York Times, "Never, ever have I seen anything even remotely as disgusting as this."

Of the 200 chimps originally abandoned on the island, 66 are left, ranging from babies to a 41-year-old female. Some are blind and limping, suffering from the effects of age and decades of experimentation. When the Humane Society of the United States (HSUS) rushed to the island to take up the burden dropped by the NYBC, they found the chimps had no source of fresh water.

Fortunately, kind strangers have stepped up. The HSUS has been ensuring that the unlucky chimps are fed and cared for, and has been fundraising the $30,000 needed to care for the chimps each month. In the meantime, animal lovers continue to fight to hold the NYBC accountable - and the chimps continue to survive.

And you can watch the full video below - complete with excited chimp noises. 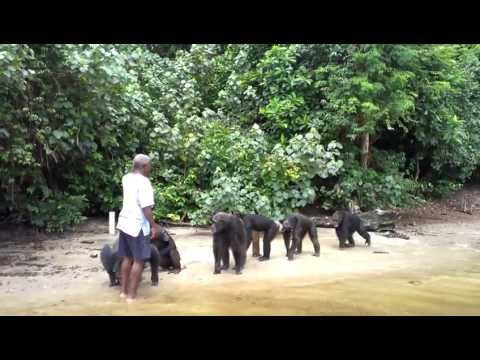