When Mosha the elephant was just 7 months old, tragedy struck - a landmine explosion claimed her right foreleg. Luckily, she was saved by Friends of the Asian Elephant Hospital, a rescue center in Thailand that bills itself as the oldest elephant hospital in the world.

Mosha has been outfitted with prosthetic legs since 2008, a couple of years after she was rescued from the wild near the Thailand-Myanmar border. Therdchai Jivacate, a doctor who specializes in human amputations, attributes her survival to her prostheses. "When she cannot walk, she is going to die," he told the Daily Telegraph in 2009.

Like a hermit crab outgrowing his shell, Mosha's increasing size means she needs a new leg every few years:

Having bulked up since her youth - Asian elephants munch on up to 330 pounds of vegetation a day - she recently received an upgrade: 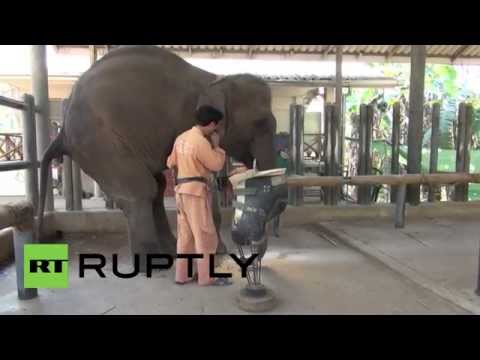 Elephants aren't the only ones getting help from prosthetics - check out this pup running again thanks to new 3D-printed limbs.