After Years As Lab Test Subjects, Beagles Feel Love For The First Time

A group of beagles slated to be euthanized after spending nearly their entire lives as laboratory test subjects are finally experiencing something they had for so long been denied - the tenderness of human love.

Ten dogs were saved from a South Korean research facility, thanks to several local animal rescue organizations and the Beagle Freedom Project. The beagles, who were no longer of value to the lab after six years of testing, were going to be euthanized in February, but rescuers intervened to have them retired instead.

After so many years behind bars, seen merely as objects of study, many of the dogs were understandably timid in the loving hands of the people there to save them. But, as rescuers write, they were "all incredibly sweet" regardless.

Despite the unimaginable bleakness of their lives in the lab, the future is bright for these rescued beagles. They are now receiving veterinary care and will soon be adopted into homes as beloved pets - but that's still only a dream for a multitude of dogs like them still stuck in labs across the world.

"These sweet dogs are the lucky ones," writes the rescue group. "Korea uses 8,000 dogs a year in research and the vast majority will never get to know love and liberation."

Fortunately, reprieve is on the horizon for countless lives used for research in South Korea, as the country moves to ban most cosmetic testing on animals. 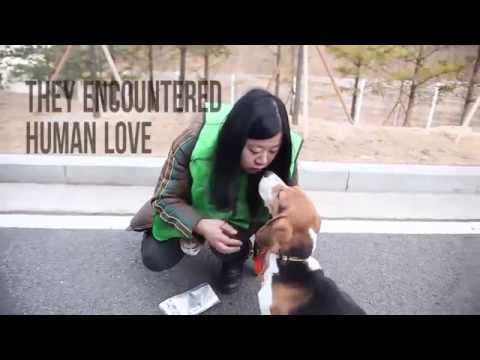 To learn how to adopt a rescued beagle, or find out other ways to help, visit the Beagle Freedom Project's website.