While dozens of homes have been destroyed by a series of bushfires ravaging South Australia, Victoria and New South Wales, another group of residents are in peril. Rescuers are scrambling to save wildlife, pets and livestock from the fire's approach.

Slow-moving koalas can't move quickly enough to get out of harm's way, and in fact, according to the International Fund for Animal Welfare (IFAW), baby koalas often "wait in burning trees, crying for their mothers...They just sit there and wait to be rescued." Singed paws aren't just painful - burns from contact with the fires can result in potentially fatal infections.

But the folks over at IFAW came up with an ingenious solution to help save one of Australia's most iconic animals: mittens.

Well, technically they are called "paw protectors" and will cover their paws after they've been treated with burn cream and bandages. But these aren't just any paw protectors. They are, in fact, clever pieces of fabric that anyone with a needle and thread can make. IFAW is asking volunteers to print out this handy pattern and sew together the paw protectors with clean 100 percent cotton (sheets, towels or cotton t-shirts make the perfect raw materials).

Mitten-makers can send their creations to IFAW at 6 Belmore Street, Surry Hills 2010 in New South Wales, Australia. Just one pair could help save a koala's life - and, we can't deny it, he'll look pretty cute while recovering.

UPDATE - IFAW announced that rescuers have received all the mittens they need to treat koalas suffering from burns in Australia's bushfires. See this page to donate to other similar causes to save animals in need.

Creating homemade paw protectors isn't the only way people are helping koalas in Australia. Last week, Colin Phil Cook posted a YouTube video of himself giving such much-needed hydration to a thirsty koala - an image that is as striking as the problem is severe: 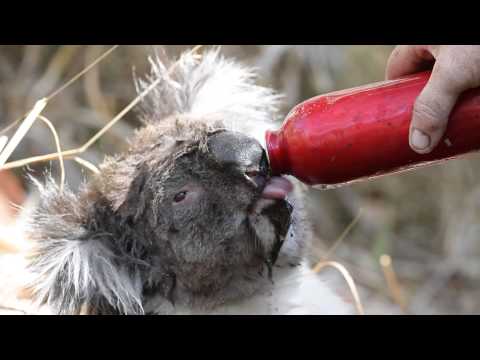