Every year it gets warmer — and harder for koalas to survive.

Koalas normally get the hydration they need from the eucalyptus leaves they eat, but as drought and wildfires caused by climate change dry out their food supplies, many koalas are starting to drink water because they're just so thirsty.

Robert Frend, a farmer from New South Wales, Australia, noticed how thirsty the koalas had gotten and helped researchers at the University of Sydney bring them water. Frend invented something called Blinky Drinkers, a water station that attaches to trees so that koalas can drink all they want.

In April 2016, researchers set up 10 of these water stations on the ground and up in the trees on a large piece of land with a sizable population of koalas. They also installed a surveillance system to see how much the koalas were using the Blinky Drinkers.

What they found was really surprising: The koalas drank a lot, even waking up during the day, when they normally sleep, to go drink water from the stations on the ground. All of the Blinky Drinkers were visited - 193 times total. And this was in the fall and winter seasons, when the heat isn't so severe.

Researchers were excited to find out something new about how animals change their behavior based on climate change - and worried about the future of the iconic Australian animal.

"What will happen when temperatures rise in summer to make the leaves even drier and the koalas require more relief?" Dr Valentina Mella, a postdoctoral researcher in the University's School of Life and Environmental Sciences, said in a statement. "Increasing hot and dry conditions will mean more droughts and heat waves affecting the koalas' habitat."

"It is believed that koalas are particularly vulnerable to climate change because they rely exclusively on trees - not only to sleep on but also for eating, which together comprise of the bulk of their activities."

Now that researchers know koalas will accept a drink when offered, this could be a lifeline for koalas in the future, as the planet gets even warmer. Already, there are as few as 43,000 koalas left in the wild.

"I'm a big kid too when it comes to koalas, I think they're a lovely animal and I'd hate to see them disappear," Frend told Reuters. "If I can help, well I get a certain amount of enjoyment out of that. Yeah, they're a lovely species."

"The scientific literature is filled with statements saying that koalas do not need to drink free water but our results show that koalas could benefit from water supplementation," Dr. Mella said. "This is a perfect example of how the understanding of animal behavior can be applied to solve pressing problems. We hope to use our findings to create a practical plan to manage Australia's rural lands for this iconic species." 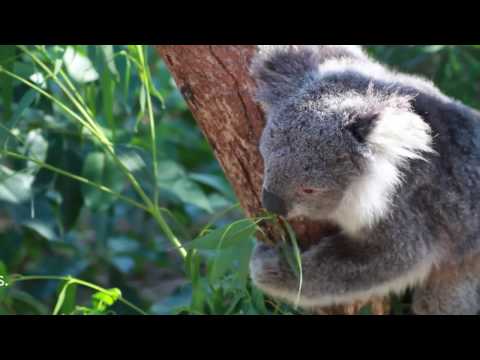