"She's a wonderful example of how resilient animals can be."

Duckie was found nearly dead on a Baltimore, Maryland, window sill in late August. The month-old kitten's ears had been burned off, the pads on her feet were seared.

The rest of her body wasn't too hurt, which led veterinarians at BARCS, the city shelter, to the conclusion that these injuries had been inflicted on her; she hadn't just gotten caught in a fire.

Police began looking for the person responsible for hurting Duckie.

And Duckie, after getting veterinary care, went home with Lisa Morabito, BARCS' director of operations, to heal until she'd be ready for adoption.

There, she's gotten to see a much better side of humanity.

"She loves to be held like a baby and have her belly scratched," Morabito tells The Dodo.

"Which is good because that's the biggest area not burned so she can be scratched without any pain." 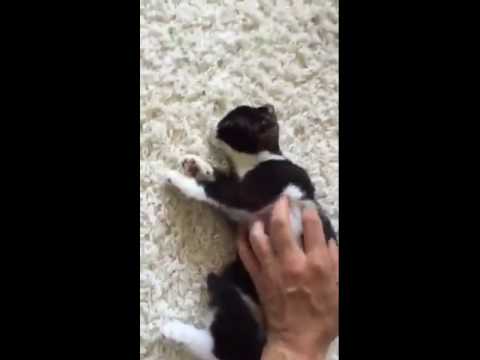 Duckie has been with Morabito for about a month now.

The kitten dislikes the daily chore of having her wounds treated with burn cream. Otherwise, she seems to be enjoying this new life.

She adores Morabito's four dogs, who reciprocate her attention, and four cats, who aren't always as wild about their new foster sister.

"They follow each other around the house, share toys and nap together. It's ridiculously cute," Morabito says.

In fact Duckie sticks like glue to all the humans - Morabito and her husband Nick, and Ava - hanging out on the couch, napping on their necks or on top of their heads.

The person who hurt Duckie hasn't been found yet. If you have any information, please tell the Baltimore police, so they can bring Duckie's abuser to justice, and stop this person from hurting more animals.

Duckie, meantime, is just a couple of weeks from being well enough to go into a permanent home. Her ears will never grow back, but her paws are almost better, and the kitten's got a loving adopter waiting.

(Morabito is having a hard time thinking of Duckie going away, but also knows there'll be more foster kittens who need her.)

Amazingly, even after all she's been through, Duckie takes attention and affection in stride.

Duckie seems to think that getting belly rubs, having friends and being loved is what's normal. And now, she's right.

"She's a wonderful example of how resilient animals can be," says Morabito. "Duckie has no fear of people, she runs right up to new people and purrs so loudly."