"It's hard not to care when you hear about her story."

For the past 17 months, Kina, a false killer whale who once worked for the U.S. Navy, has lived in a tiny tank in Sea Life Park in Hawaii. The tank is shallow - far too shallow for her to dive. Natalie Parra, cofounder of Keiko Conservation, compares the tank's size to a hotel swimming pool.

"She suffers in that park - none of the guests even know that she's there," Parra told The Dodo. "And she's basically alone, all day, every day. She just logs[a term for when dolphins float motionless at the surface]."

But Kina, who's now 40 years old, has another dubious distinction: She's the last survivor in the U.S. of Japan's infamous drive hunts.

Kina's listless existence at Sea Life Park is just the latest chapter in what's been an extremely difficult life. She used to live in the wild, but, in 1987, she was captured off the coast of Iki Island in Japan.

What happened at Iki Island is similar to what's happening now in Taiji, Japan. In both places, Japanese fishermen have driven wild dolphins and other cetaceans into coves, selected certain animals for captivity and slaughtered the rest, turning the water red with their blood.

Yet the motive for the Iki Island dolphin drives was entirely different from Taiji, Hardy Jones, executive director of Blue Voice, explained to The Dodo. "Food was never the primary reason why they killed them," Jones said. "It was predator eradication." The fishermen prized the squid and yellowtail fish off the coast of Iki, but worried the dolphins were eating them, so they killed the dolphins.

In the late 1980s, the drive fishery at Iki Island finally shut down, but the exact reason for this remains a mystery.

"One reason could be that they completely wiped [the dolphins] out," Hardy said. "Another was that the dolphins had learned to avoid the place. The third reason, and maybe the most likely one, is that rising water temperatures had redistributed the prey around Iki."

Kina was one of the animals selected for captivity at Iki Island in 1987, and she was initially transported to Ocean Park, a marine park in Hong Kong that has a record of frequent animal deaths.

Then, in November 1987, the U.S. navy purchased Kina, and moved her to the naval station in Kaneohe Bay Hawaii, where Kina lived in a sea pen with two bottlenose dolphins, BJ and Boris. The navy used all three animals for echolocation research, although the details of this research remain vague, according to Parra.

In 1993, Kina's life changed once again - Kina, BJ and Boris were transferred to a sea pen on Coconut Island, where the University of Hawaii continued to use the three animals for echolocation research.

"At least it was kind of a stimulating life," Parra said. "She had Boris and BJ with her. She was in a sea pen that was big enough so fish could swim through it."

Then, in August 2015, this all came to an end. According to Parra, it was costing the University of Hawaii about $900,000 a year to keep Kina, BJ and Boris, and the university decided to get rid of them.

"They say that Sea Life Park stepped up and said, 'We'll take her,' but in truth, they just auctioned her off to the highest bidder, which happened to be Sea Life Park," Parra said, although she added that the University of Hawaii wouldn't reveal how much it was paid.

The University of Hawaii, however, vehemently denies that Kina was "auctioned off." "She was sold to the program that could provide the best support, to the best people who could care for her, using the required and established state of Hawaii procedures for sales," Paul Nachtigall, director of the Marine Mammal Research Program at the University of Hawaii, told The Dodo.

Sea Life Park is a popular marine park on Oahu that offers guests swim with dolphin experiences and sea lion encounters. Yet, since Kina's arrival, she's been hidden from public view in a tank at the back of the park. To Parra, this seems incredibly bizarre. Why would a public marine park want Kina in the first place?

In a news release, Sea Life Park announced that the animals would continue to be used in research, but Parra isn't sure if this has happened.

"We don't know if they got her as a package deal, and didn't really want her, and they just wanted the two bottlenose dolphins for shows," Parra said. "It's a little bit strange."

According to Cathy Goeggel, president of Animal Rights Hawaii, Sea Life Park also never appeared to get a permit to transfer Kina from Coconut Island to Sea Life Park, which is generally required by the Hawaii Department of Agriculture (HDOA) when transferring animals within Hawaii.

Goeggel figured this out when she requested the animals' permits from the HDOA through the Freedom of Information Act. "There were permits to transfer the two dolphins from Coconut Island to Sea Life Park, but there was no permit from Kina," Goeggel told The Dodo. "They were ignoring the law."

Sea Life Park reportedly obtained "retroactive permits" in April 2016 for the transfer of the two dolphins, but they still haven't shown a permit for Kina, according to Parra. "It doesn't make any sense," she said.

However, the HDOA has a different take on it. "It was ... previously explained to Animal Rights Hawaii that the false killer whale was allowed to be moved because of an urgency in the deteriorating condition of the holding pens at Coconut Island," Janelle Saneishi, public information officer for the HDOA, told The Dodo. "That caused concern for the immediate welfare of the false killer whale."

"Sea Life Park has always maintained permits under both the U.S. Department of Agriculture's Animal Welfare Act and the National Oceanic and Atmospheric Administration's Marine Mammal Protection Act," she added.

Permits aside, Parra thinks Kina is miserable at Sea Life Park. "She was in circular tub before, but now she's in the square tank next to it," Parra said. "It's shallow, and there's absolutely zero sun coverage."

The Animal Welfare Act states that natural or artificial shelter "shall be provided for all marine mammals kept outdoors to afford them protection from the weather or from direct sunlight." Yet shade is not enforced as mandatory, Amey Owen, public relations coordinator for the Animal Welfare Institute (AWI), explained to The Dodo. "There are shade provisions; they have been interpreted to mean that shade is optional," Owens said.

"The industry claims that cetaceans can avoid the sun by going below the surface of the water, as they do in the wild," Naomi Rose, a marine biologist with AWI, told The Dodo. "This is incorrect - light penetrates to the bottom of shallow captive display tanks, which are also usually painted reflective colors."

In other words, Kina would be suffering in the sunlight, and probably getting burned.

Besides the lack of shade, there are also concerns about cleanliness. Both past drone footage and recent photos show that Kina's tank is filthy - much dirtier than the other "on display" tanks at the marine park.

"One of the members of Empty The Tanks Hawaii is an environmental scientist with an emphasis in clean water and water quality testing," Parra said. "She says in the comparison of Kina's pool to the one they use with guests located above it, the one above is much cleaner as there is no green coloring to it due to a filtration system or routine cleaning. The water in Kina's pool is nearly green, a clear indicator of excess nitrogen [which often comes from waste] in the water."

Kina also has little daily enrichment. She was separated from Boris and BJ, leaving her all alone.

Sea Life Park, which is owned by Palace Entertainment, has been given multiple citations in the past for not providing Kina and the other animals with shade from the sun, according to documents Parra obtained via the Freedom of Information Act.

Palace Entertainment also owns Miami Seaquarium, where an orca named Lolita has spent 46 miserable years in the tiniest orca tank in the U.S. "They're cited all the time for Lolita, but I think they're trying to pay off the fines rather than fix the problem," Parra said.

Sea Life Park seems to be doing everything it can to keep Kina hidden from public view, according to Perra. Not only does it keep her in a tank at the back of the park, but it also reportedly made employees of the nearby Oceanic Institute (who can see Kina from their property, which adjoins Sea Life Park) agree not to release any photos of her.

"I know they had all the interns and staff at the Oceanic Institute sign some sort of NDA [nondisclosure agreement], and they're not allowed to give out any photos or videos of her," Parra said. "And we've heard that from multiple people there. It's kind of fishy. It just screams that they're guilty of something."

In October 2016, members of Empty the Tanks Hawaii managed to get a few photos of Kina in Sea Life Park itself.

"They just kind of peeked over the fence, which was open, and they just took a couple photos and videos of her and left," Parra said.

After the release of these photos and videos, Sea Life Park appeared to bump up security, and they were never able to get access to Kina's tank again, Parra said.

Determined to get another glimpse of the lonely false killer whale, Parra sent a team of photographers to a nature trail above the marine park about two weeks ago.

"They said that she was pretty much logging the entire time that they were up there," Parra said. "It's hard to imagine that she's anything but depressed."

Even with occasional interaction from her keepers, Goeggel said she doesn't think Kina gets much enjoyment.

"Right now, she's miserable," Goeggel said. "And I don't know how long she will live. She was captured in 1987, so she's not young, and she's been through a lot."

Because of Kina's age, and everything she's been through, both Parra and Goeggel hope that things change for her - and quickly.

"We're hoping to share her story enough, that it will put enough pressure on the [Hawaii] Department of Agriculture to remedy the situation, and properly retire her," Parra said. "They've used her to their advantage so much, it's kind of the least that they can do. And we obviously want to get her out of the solitary confinement that she's in now. It's hard not to care when you hear about her story."

"She is the last living false killer whale who survived Iki Island, and her life has been so horribly sad that we'd like her to go to a sanctuary," Goeggel said.

"Kina should be retired in a sanctuary somewhere in Japan," O'Barry told The Dodo. "A place like Mikura Island where dolphins are respected and protected. Kina's story needs to be told. What better place to tell that story than a dolphin sanctuary in Japan? The truth could never be told in a dolphinarium."

If you'd like to help Kina, email the animal curator at Sea Life Park, and kindly ask him to give Kina better living conditions and a proper retirement. You can also help other marine animals by making a donation to Dolphin Project.

Watch videos of Kina in her tank at Sea Life Park in Hawaii: 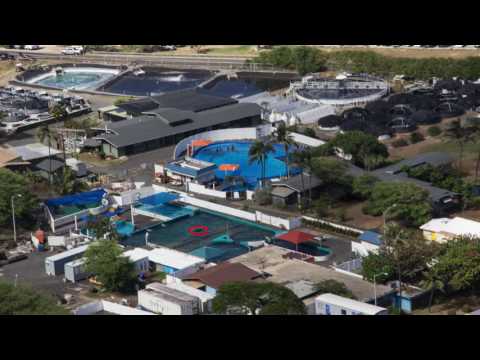