For two years, this young orangutan lived in hell.

Japik the orangutan was kept as an illegal pet, chained by her neck to a tree in a tiny rubbish-filled yard. She had no shelter aside from a crude wooden platform, and lived off scraps of discarded food. At just 4 or 5 years old, she should have still been with her mother.

She likely would have died there, unknown and unmourned, if her owner hadn't realized keeping her was illegal and reached out to International Animal Rescue (IAR), which runs an orangutan sanctuary in Borneo. The moment IAR heard about her, a team rushed to investigate.

They could never have guessed what they'd find.

At first they could only see a "pile of old rags" perched in a tree. But that pile of rags was Japik, who was huddled under an old coat as her only shelter against the driving rain.

"Japik was placed beside a tree behind the house, without shelter or a roof to protect her from sun or rain," Heribertus, a member of the rescue team, said in a statement. "When we arrived it was raining heavily and she was trying to take cover under an old jacket. We could see that the jacket was soaked through and Japik was cold and shivering."

She was sitting on her "home" - a small wooden platform that consisted of two angled planks with a hole in the middle. She was rocking from side to side to ease the pain in her limbs, or perhaps keep her balance. "After two years on the end of that short chain it's a miracle she could move at all," IAR wrote.

The short chain that linked her neck to the tree barely allowed her to move. The ground around her was buried in trash.

But even after years of torture at the hands of humans, the miserable orangutan hadn't lost her gentleness. After overcoming the shock, the rescue team's vet stepped forward - and Japik reached out her hand to greet her.

"It was as though she realised that after suffering so much misery and neglect, help was finally at hand," IAR said.

Japik's situation was even worse up close. The team rushed to remove the heavy chain that encircled her neck, and found it had been wrapped so tightly that it left a "deep wound" under her chin.

When they took her by the hand and gently led her to the transport crate, her legs were shaking from years of not walking.

It's not yet clear how Japik ended up in that hellhole, but she was likely taken from the wild when just an infant. Unfortunately, many wild mother orangutans are killed so their babies can be sold as exotic pets. And the number of such incidents is going up - palm oil plantations, and the wildfires caused by them, have destroyed massive swaths of orangutans' habitat. This deforestation leads orangutans into closer contact with human settlements, where they're sometimes killed and even tortured.

And while Japik's situation was heartbreaking, she's far from alone. Early last year, IAR rescued a young orangutan named Budi who had been living in a chicken coop and had such swollen limbs he'd cry in pain whenever he was touched. In October, they rescued a nearly "mummified" infant named Gito who had been left in a urine-soaked box to die.

And just this month IAR rescued another infant named Joss, who was so traumatized by the loss of her mother and her time in captivity that she had a break down, and now exhibits signs of severe psychological stress - among other things, she can't stop hugging herself.

All of them had similar stories. But Japik suffered even longer than the rest, and IAR has yet to determine whether she'll have lasting health impacts from the years without proper food, shelter and comfort. She's currently in quarantine at IAR's rescue center, where she's being assessed by their veterinary team. 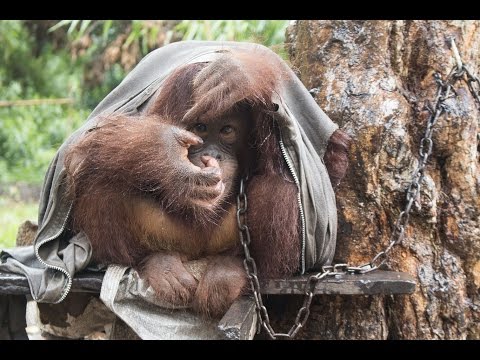 But once she's out, she'll be able to join the rest of the orphaned and rescued orangutans at the center - and, in the absence of her mother, begin the years-long process of healing, learning to be an orangutan and, hopefully, one day being returned to the wild she was so cruelly taken from.

For now, her rescuers are taking comfort in the fact that the gentle orangutan had enough spirit to survive as long as she did.

"It is hard to imagine how Japik endured those years alone, cast aside and forgotten like the rubbish on the ground around her," IAR wrote. "It is amazing that she's even alive."

If you'd like to help support Japik and the other orangutans IAR cares for, you can make a donation here.