Injured Dog Climbs Mountain To Find Someone Who Can Save Him

Eldad Hagar, founder of Hope for Paws, was at the Costa Rica Dog Rescue one night when an unexpected visitor showed up.

"We were up in the sanctuary just hanging out there with the dogs and all the sudden we heard Scott yelling for help," Hagar told The Dodo.

Scott Bradley, founder of Costa Rica Dog Rescue, was outside the sanctuary when a dog approached, severely injured and looking for help. It appeared that he had been attacked by another animal. The sanctuary is on top of a steep hill - which means the dog, later named Hank, had climbed all the way up there, while hurt, looking for someone to help him.

"I ran down the mountain and I saw Hank there and was able to block him from running down the hill again," Hagar said. "I was able to calm him down and have him come to me."

Hagar and Bradley brought Hank into the sanctuary and immediately made him comfortable. Hank was an older dog, and was missing most of his teeth. They called the local vet clinic, which said it couldn't see Hank until the next morning. So the rescuers gave him some medicine and made sure he felt loved and safe until his injures could be tended to.

"The craziest part is that he walked up there," Hagar said. "Somehow he knew to go to a place where there were barking dogs to get help, even though he'd likely just been attacked by a dog."

The next day, Hank was taken to the vet, where they decided he would need to stay for awhile due to several infections. While there, several dogs came up to say hello to Hank and welcome him - and he was eager and gentle with every single one.

Even though Hank's injuries likely came from another dog, he has no ill will towards anyone, and is super great with every human and animal he meets.

"He just licks all the dogs around him," Hagar said. "He's just so cool and such a special, special dog. Some dogs just have a very special impact on you and Hank is definitely one of those dogs."

After being treated in Costa Rica, Hank flew to Los Angeles and is now being fostered through Grand Paws Rescue.

Check out the full video of Hank's rescue below: 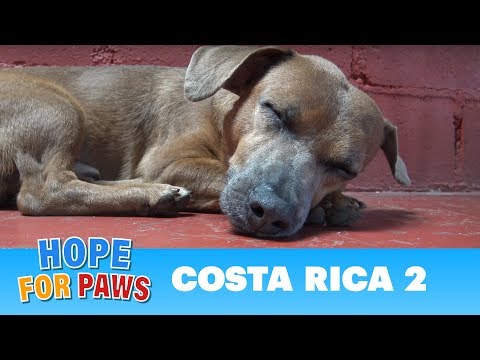