This has to stop.

Throngs of visitors regularly gather at a zoo in Germany to see a dozen captive elephants, including babies, performing tricks, like standing up on their hind legs and running around a ring in a line, or holding each other’s tails with their little trunks — but secret footage shows the grueling and sad ‘training’ that makes these shows possible.

Behind the scenes at the Hanover Adventure Zoo, young elephants are hit with bullhooks and whipped into submission, footage from PETA Germany reveals.

Bullhooks are metal rods with sharp hooks on the end that have traditionally been used to beat elephants during training for circus acts or elephant rides. Because these tools are considered inhumane and cruel, many cities have banned the use of them.

But footage shows that the young elephants at the Hanover Adventure Zoo endure whippings and lashings, and they appear to cower at the sight of the bullhooks and whips, until they comply with striking unnatural poses, like balancing on two legs.

Scott Blais, CEO of Global Sanctuary for Elephants, called the training in the footage “incomprehensible and unjustifiable.” In an op-ed he provided to The Dodo, Blais explained that “there are no credible excuses, no valid reasons and no justification for the brutality imposed on the elephants at the Hanover zoo or any captive elephants. It is abusive and damaging, literally destroying the spirit within each of these sentient, sensitive and uniquely emotional beings.” 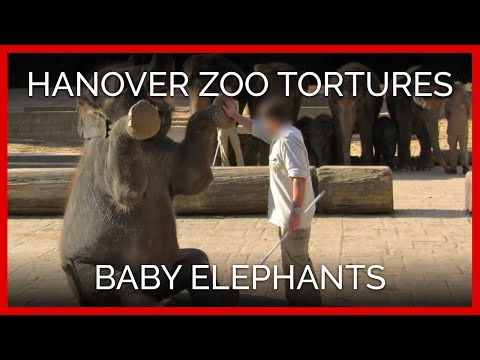 Elephants are smart, emotionally complex animals who form tight social bonds and help each other care for and raise their young.

But the adult and young elephants at the Hanover Adventure Zoo know no such life. They only know the daily routine of training, performing and pain when they don’t comply.

“Without doubt, this video displays just the tip of the iceberg of what these elephants endure, yet the zoo director still claims that their elephants are trained with kindness,” Blais said.

Elisa Allen, PETA U.K. director, added in a statement that zoos should “ask the public to donate to programs that protect animals in their native habitats, rather than turning them into living exhibits."

The sheer amount of space elephants need to live normal, natural lives has even caused more progressive zoos in the U.S. to retire their elephants to sanctuaries. Sadly, the elephants at Hanover Adventure Zoo seem a long way from such a happy fate.

Local law enforcement has been notified about the treatment of the elephants and PETA Germany is calling for an end to the zoo’s elephant exhibit and breeding program.

The Hanover Adventure Zoo did not immediately respond to The Dodo’s request for comment.

To help elephants rescued from abuse, you can make a donation here. You can also share this article to let people know not to attend the Hanover Adventure Zoo or other elephant shows.