A man taking a walk around his neighborhood happened to be in the right place at the right time to witness something extraordinary.

"I was walking by and was sure it was roadkill," Clifford Zvengrowski, of Alberta, Canada, told The Dodo, referring to a bird he spotted lying on the asphalt of the street. "Wasn’t moving at all."

​​​​​The bird was a magpie, and soon other magpies began flocking over and surrounding their fallen friend.

It's a touching fact about magpies that they are known to hold funerals. "When one magpie discovers a dead magpie, it begins calling loudly to attract other magpies," the Cornell Lab of Ornithology writes on its All About Birds resource. "The gathering of raucously calling magpies (up to 40 birds have been observed) may last for 10 to 15 minutes before the birds disperse and fly off silently."

Zvengrowski watched as several other magpies began to land and surround the overturned and seemingly lifeless bird — but they were all in for a surprise.

Zvengrowski managed to capture the moment on camera. "I started filming because the other birds were reacting," he said.

This is what he saw: 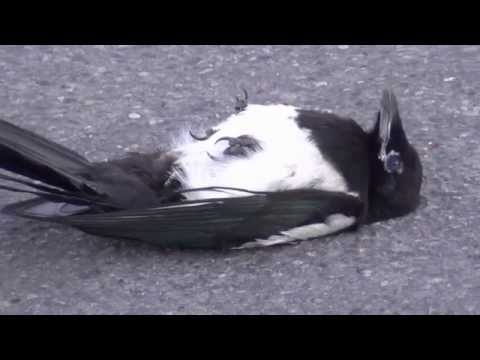 After several minutes of the birds showing such deep concern for the motionless magpie, the video shows the tumultuous moment the bird shocks everyone as he suddenly jolts up and shelters himself under a parked car.

The bird had seemingly been stunned, perhaps sideswiped by a passing vehicle, Zvengrowski guessed. "I do not know what happened," he said, "but [he] was on a residential street playground zone, so it’s unlikely a car would have hit [him] too hard."

Zvengrowski didn't want to disturb the bird by getting too close, but realized he needed to do something. "I know birds eat a lot of fatty foods and especially love nuts. There was a convenience store nearby so I bought some," he said. The video ends with Zvengrowski offering some snacks to the bird as he recovers his strength before giving him some space.

If it weren't for his friends, perhaps the magpie would have lain in the road a lot longer in his shocked state. Thanks to his noisy compatriots, though, he moved quickly out of danger.

"I assume the magpie ate the nuts, recovered and flew away," Zvengrowski said.