Super Smart Crows Pick Up Trash At This Amusement Park

Six crows named Boubou, Bamboo, Bill, Black, Bricole and Baco are doing what so many people could, but don't: picking up litter.

In a brilliant scheme, designed perhaps to make people feel guilty for littering, a French theme park has enlisted these super intelligent birds to clean things up.

But the crows wouldn't be so intelligent if they gave away work for free, would they? The birds working at the Puy du Fou Grand Parc and Cinéscénie get paid for their labor in treats.

"Once they understand that bringing back a bit of paper gives them a nugget in return, that's it," Christophe Gaborit, the falconer at the park, said. "They get it. Then they just want to do that all day." 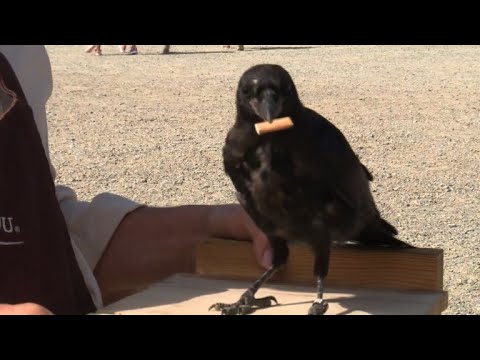 This isn't even the most complex thing crows have been observed doing — a study that came out in June shows that some kinds of crows even make their own tools and learn how to use them so they can solve new types of problems.

Boubou, Bamboo, Bill, Black, Bricole and Baco don't have to do too much in their new job. Mostly, they pick up cigarette butts, since park visitors are generally mindful of not littering. But the point of the program isn't just to keep things spotless.

“The goal is not just to clear up, because the visitors are generally careful to keep things clean," Nicolas de Villiers, president of the Puy du Fou park, told The Guardian, "[but to show that] nature itself can teach us to take care of the environment.”