Nobody can believe he’s real 🐶🕷

Deep in the rainforests of Ecuador, there lives a creature that looks like it jumped out of a book on mythical animals — and it’s only the size of a thumbnail.

With eight spindly yellow legs holding up what appears to be a big black dog’s head, the bunny harvestman is both terrifying and oddly cute.

The rabbit-like ears and yellow markings, which resemble glowing eyes, all add to the creature’s wolflike appearance, and people can’t quite believe he's real.

In fact, they’re kind of freaked out.

Though the little creature looks like a spider, he technically belongs to the same order of arachnid as daddy longlegs (who are also harvestmen). This makes him a cousin of the spider — which may explain his tendency to scuttle around in very spiderlike fashion. 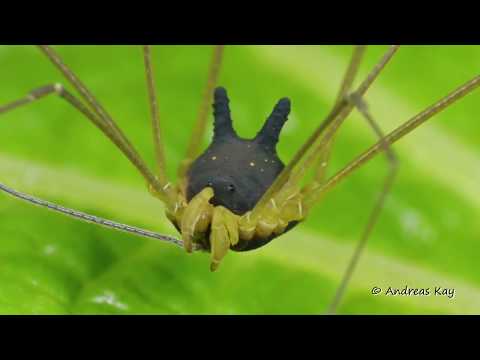 Nearly 60 years after the bunny harvestman’s discovery by Carl Friedrich Roewer, scientists are still not entirely sure how the rare little creature got his unique look.

One prevailing theory is that the animal’s adorable “ears” and large head are meant to make it look more threatening to predators, notes Andreas Kay, a scientist and photographer who caught the creature on film in July 2017. “Maybe the eye spots and ear-like protuberances are meant to fool predators into thinking the creature is larger than it really is,” Kay explains in a blog post.

If you do ever come across one of these little guys — don’t worry. As their sweet doglike head suggests, bunny harvestmen are not venomous, and pose no threat to humans whatsoever.

Nature can surprise you in many weird and wonderful ways. And if the bunny harvestman exists, who knows what else is out there?