A group of scientists were recently out on the water near British Columbia when they noticed they had a huge visitor — a salmon shark was swimming along near their boat. They were excited by their visitor and decided to watch him for a bit — when they suddenly noticed him doing the cutest thing.

Floating near the boat was a log, covered in barnacles, and the shark kept swimming past it …

… and rolling around and scratching himself along the log as he swam along.

“It [the shark] looked like it was aiming for these big clumps of barnacles and it would heave its body out of the water and just slide it along,” one of the scientists said in a video about the encounter.

They realized the shark had some parasites attached to his fin — and he was trying to scrape them off using the barnacles on the log.

It was pretty similar to a dog trying to scratch himself on a table or the floor — but this behavior in a shark had never before been caught on film.

“It’s really interesting that these logs out at sea may be scratching posts for them,” the scientist said.

The constant swimming back and forth and rubbing himself all over the log made the shark look pretty cute and playful, and the team hopes the video will help people see sharks for who they are, instead of as threats.

They were overjoyed that they were there to be able to witness it all in person. Even though the team watched him for a while, the shark didn’t seem to notice or care at all that he had an audience.

“We were observing an animal in the wild doing what it naturally does and it didn’t seem to be bothered by us at all,” one scientist said.

You can watch the full video of this adorable encounter below: 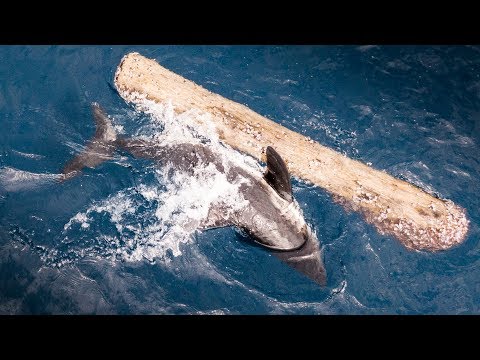