Seals Are Flinging Themselves Off Cliffs To Avoid Tourists

A selfie isn't worth this 😞

St. Mary’s Island, a small nature reserve in the UK, made headlines this week when a video that showed a group of frightened juvenile grey seals hauling themselves off cliffs and crashing into the rocks below went viral.

“As part of our work, SMSW seal wardens record, collate and report on wildlife disturbances on St. Mary's Island Local Nature Reserve,” Sally Bennett, a spokesperson for the group, told The Dodo. “Video clips are recorded not to name and shame the individuals, but to record what happens.”

In just 70 days, SMSW observed 1,574 incidents where the seals flung themselves off the cliffs. More than half the incidents were due to human encounters, according to UK-based outlet the Chronicle.

When seals are scared off the cliffs, such as by the sight or sound of humans, it disturbs their daily routine and can have serious implications for their health, Bennett said. “When it happens repeatedly, it can reduce the animal's chances of remaining healthy or even their survival,” she explained. “The chance of injury is high.”

Some of the disturbances shown in the video occurred when people blatantly ignored advice to stay away from the seals, Bennett said, while at other times it was merely the sight or sound of people in the lighthouse compound nearby that frightened the seals.

Being harassed by humans is a particular threat on St. Mary's because the island is a base of life for the local seal populations.

“St. Mary's Island is a grey seal haul-out," Bennett explained. "A haul-out is a land base where seals return on a regular basis to carry out essential life functions such as breeding, digestion, restoration of energy and, during the spring and summer months, for their annual molt.”

“Rest is essential for these young pups and the loss of an important ‘pit stop’ will have a serious impact on their well-being,” she added.

Because grey seals are so sensitive, when they are frightened, they will quickly stampede toward the safety of the water — even if they're stranded in high places.

Constantly clambering over jagged rocks can lead to exhaustion, stress and injuries to the seals’ claws and flippers, which can affect their ability to swim and fish. Pregnant seals fare even worse.

“Pregnant females carry their pup in their bellies and rushing over rocks means bouncing on their pups, which can lead to medical complications that can be fatal for both mother and pup,” SMSW said.

But things could soon get even worse for these seals. SMSW is worried about the proposed construction of a new, open-topped viewing platform at the island’s lighthouse, as well as other changes, that could increase foot traffic by 25 percent, further upsetting the very wildlife that nature lovers travel to the island to see.

“The wildlife on St. Mary’s is already subject to chronic levels of disturbance,” SMSW said in a statement. “There must be improvements made in the development plans to safeguard this place of natural wonder and the wildlife that make it home for generations to come.” 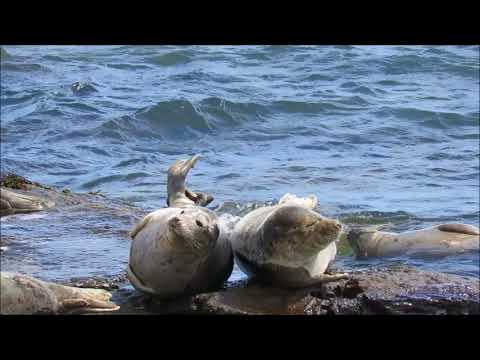 This isn't the first time the seals of St. Mary’s have been threatened, either. During the Pokemon Go craze in 2016, a PokeStop which was placed on the island created frequent disturbances for the seals — and the SMSW fears the new viewing platform could have a similar effect.

Of course, these incidents can be easily avoided, Bennett noted, if people respect the restricted areas of the island and remain quiet and concealed. And, as with any wildlife, remember that selfies aren't worth disturbing the animals.

For more information on the grey seals of St. Mary's Island, and the proposed viewing platform, visit the St. Mary's Seal Watch website.