Once she was feeling better, she turned yellow!

A little girl was playing in the sand at Indian Shores Beach near Tampa, Florida, when she saw a seagull drop what she thought was a Cheeto right at her feet. But when she went to pick it up, she discovered it was actually a tiny orange seahorse, struggling to breathe. She immediately put the seahorse into her sand bucket and filled it with water.

She showed her mom, and together they called the Clearwater Marine Aquarium (CMA). A rescue team volunteer rushed out to pick up the tiny creature. Cheeto was placed into a quarantine habitat where staff from the aquatics department could evaluate the seahorse.

They concluded that Cheeto was a female lined seahorse who was likely grazing for tiny shrimp that inhabit seagrass beds and reefs. Seahorses commonly change color to match their surroundings for natural camouflage, so she was probably living in red and orange sponges before the currents swept her toward the beach. That’s where the hungry seagull swooped down and grabbed her in his beak.

Seagulls usually spit seahorses out right after picking them up due to their bony structure. If it happens over land, the seahorses have little chance at survival, according to Don Stansell, a marine biologist with CMA.

“The chances of surviving being dropped by a seagull in the sand are small,” he tells The Dodo. “It’s amazing because all of the things happened at the exact right time and probably only in a two-minute window for her to have survived.”

A week after her arrival, Cheeto began to nibble on seagrass. Bill Potts, chief marketing officer at CMA, said everyone cheered the first time she ate. She also turned a bright yellow to match her surroundings.

The aquarium set up a webcam and Cheeto’s recovery was streamed live on CMA’s Facebook page.

Stansell, like many viewers, became obsessed with the webcam. “I’d wake up in the middle of the night just to make sure she was OK,” he tells The Dodo. Stansell said that despite her traumatic experience, Cheeto didn’t appear to have any medical issues and could be released back into the ocean. He felt there was no reason to hold her back.

It was a hot, sunny day when Stansell and staff brought Cheeto out to sea and anchored in an area among acres of seagrass where other seahorses live so they could release her. When he opened the small transport container, she didn’t seem to want to go at first.

“But once she did, she took off,” says Stansell. He eventually lost sight of her and was overwhelmed with emotion and relief that she made it. 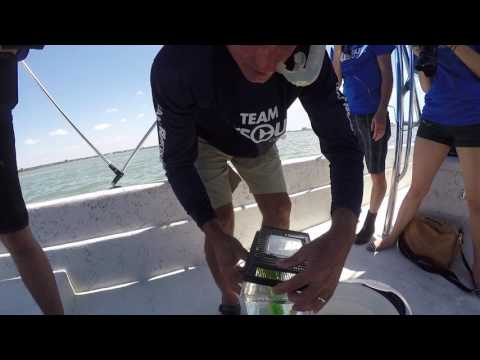 Clearwater Marine Aquarium is a nonprofit organization that rescues and rehabilitates marine life with the goal of releasing animals back into their natural habitats.

You can donate to the aquarium’s animal care fund.