When a door slid open just the other day at Project Chimps, a sanctuary for retired lab chimpanzees in Georgia, no one knew who would be the first to step outside.

It's no wonder that a few of the 10 new chimps were hesitant — they had never seen so much open, natural space before. It was probably like stepping into a different world.

A camera in their new home, a 6-acre habitat called the Peachtree Habitat, showed the moments when Precious — who, at 28 years old, is one of the older chimps of the group — stepped onto the wooden platform where there were some pieces of fresh fruit strewn for the group's enjoyment, and began to look around.

"She led the way and was soon followed by Krystal, Jill, Jamie, Jurita, Haylee, Tristen and Sophia," Project Chimps wrote in a release. "Tiffany and Torian were the most apprehensive, hanging back ... Eventually, they both overcame their fears and stepped outside." 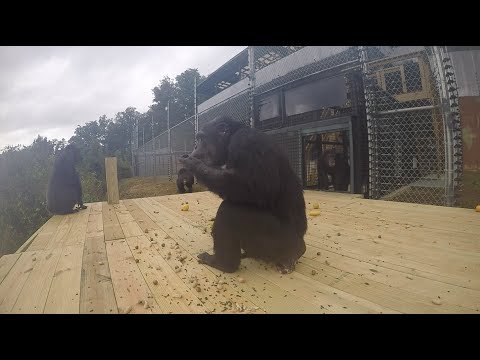 Jurita, at 29, is the oldest chimp at the sanctuary, and she, like Precious, was courageous in looking around. And when she saw 9-year-old Krystal looking a little overwhelmed as she sat on the platform of their new world, with the open sky above them, she went over and gave her a hug.

"It was like Jurita was saying, 'We’ve got a whole new life here. It is OK. It is safe,'" Leslie Wade, manager of communications for Project Chimps, told The Dodo. "[Precious and Jurita] were the first to go over and check out the forest and the other chimps followed ... and really gave them the reassurance to go explore."

The chimps who call Project Chimps home all come from the New Iberia Research Center in Louisiana, which holds the largest population of captive chimps in the world, according to Wade.

In 2015, lab chimpanzees were given endangered species protections, which meant an end to using them for research. The chimps at New Iberia live in semi-outdoor habitats while they wait to get transferred to sanctuaries. Project Chimps is working tirelessly to transfer the animals from the research center as fast as they can build (which depends on a steady influx of donations to expand the habitats for these chimps).

The newest group of chimps had a fantastic first day at their new home.

"This was the first time they were able to roam around with open sky above their heads," Wade explained.

Any initial trepidation about being out in the great outdoors was soon calmed through a universally recognized antidote to nerves: snacking.

"The chimps sat outside the door on the new wooden platform built just for them," Project Chimps wrote. "The platform proved to be the perfect spot for the chimps to get their bearings, enjoy some of the fruits and nuts scattered outside for them, and reassure one another that everything would be OK."

There are some other exciting firsts for these ladies on the horizon. Jurita has already spotted a male chimp group, known as Marlon's group, in a neighboring habitat. "She walked back and forth and issued a loud chimpanzee bark to let them know that she's one of the highest-ranking females in her social group," Project Chimps wrote. "No doubt, Marlon took notice!"

Precious has no idea that someone very special is also living at Project Chimps — Loretta, who is actually her daughter, whom she hasn't seen since she was born. "They have not met yet," Wade said, "and they live right next to each other."

But for one day, just being out in the open forest, snacking together, was enough. As soon as a caregiver rang the dinner bell, all 10 chimpanzees came indoors to eat a proper meal together in their beautiful new home.

You can help more chimps arrive at this sanctuary by making a donation to Project Chimps.