He knew at that moment everything would be OK.

When a tiny baby chimp arrived at a sanctuary in Cameroon, he wouldn't let anyone touch him.

That's because he'd already seen some of the worst things people can do to creatures like him. Now known as Farah, the 10-month-old chimp was confiscated from a man who was carrying him around in a bag, trying to sell him as a pet.

It was later revealed that the man had killed Farah's mother himself.

The moment his mom died, Farah's life would never be the way it would have been in the wild. He was kept in the man's house, chained up, until authorities confiscated him.

He had no reason to trust people, but this time they were there to help. Rescuers from Ape Action Africa brought little Farah to their sanctuary for displaced animals like him.

"He was exhausted and very distressed, so he was given food and water, then quickly settled into our infant nursery with caregiver Romain for some rest," the organization wrote on Facebook. "Tired, hungry and anxious, it’s no wonder that little Farah refused to trust our manager when he tried to lift him from the back of the car. Or later when our director, Rachel, tried to smooth the blanket around him for sleeping. This is the cost of the illegal pet trade." 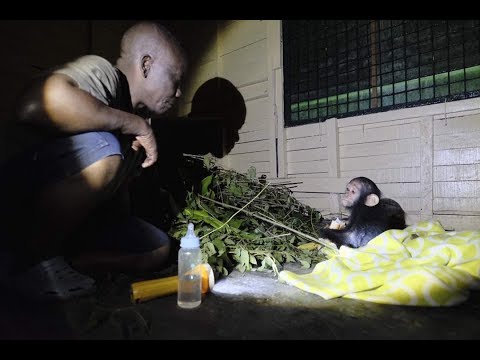 He was finally safe — but it took a while for Farah to realize that he was truly out of danger. Even though Romain gave him a blanket and leaves to make a little nest, it was clear Farah was still shaken. He wouldn't even let anyone touch him.

Soon, though, the director managed to hold little Farah for a moment while giving him his bottle. And that first comforting touch made it possible for Farah to trust these people just a little bit more.

After that, Romain managed to get closer to Farah to give him toys.

Eventually, Farah started to associate touch with comfort, not harm. Romain was able to put his arm around the little chimp, who seemed to relax right into it.

It became clear to Farah that these people were different from the man who had chained him up.

Sadly, thousands of endangered chimps like Farah suffer the impacts of illegal hunting and the illegal pet trade every year, not to mention habitat loss.

After his early trauma, Farah will need lifelong care at the sanctuary to ensure his safety and survival.

Ape Action Africa cares for hundreds of primates who have been victimized by hunting and the illegal wildlife trade. You can help them by making a donation.